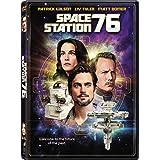 The wonderfully clever and groovy concept behind the 2104 scifi comedy "Space Station 76," which Sony recently released on DVD and VOD, is that a terrific cast plays highly dysfunctional mid-'70s stereotypes on the titular facility. Said station being decked out in an odd combination of '70s earth tones and Apple Store chic adds to the fun. Also, the purposefully low-budget special effects add a terrific "Star Wars: A New Hope" vibe to the film.

The following clip, courtesy of YouTube, of the trailer for the DVD release nicely shows both the style of satire in the film and the far out '70s decor and clothes.

Liv Tyler of the "The Lord of the Rings" trilogy and the current HBO series "The Leftovers"stars as newly arrived assistant captain Jessica Marlowe on the Omega 76 station under hilariously alcoholic and otherwise damaged Captain Glenn Terry. Patrick Wilson wonderfully rocks a 'stache and overall '70s look in the film.

Other cast members include Matt Bomer as Ted the station engineer and a typically effervescent and dreamy Jerry O'Connell as Steve.

The cast and concept of "Station" creates expectations that sadly are not met. '70s style personal drama and cheesy scifi have great comic potential but writer Jennifer Elise Cox, who plays Jan in the '90s "Brady Bunch" movies, and her fellow scribes simply do not properly blend their elements.

The opening scene in which an initial inability to identify the shuttle in which Jessica is arriving at the station seems to amusingly panic Glenn and in which a countdown ends in a funny comic bit makes one think that we are in for a film that is at least as good as the Mel Brooks comedy "Spaceballs." Unfortunately, with the exception of a few space-oriented bits that will elicit at least a smile and likely a chuckle, the space angle never really takes off (no pun intended). One keeps waiting for the menacing ship to appear, the crucial station function to begin malfunctioning, or another space-oriented threat to appear.

The parody of '70s-style personal drama succeeds better but seems more apt for a suburban neighborhood than a space station. Jessica easily could be the foxy new neighbor who develops an increasingly close relationship with the married Ted; the setting is extraneous regarding the frustration that Steve experiences regarding getting his professionally ambitious wife in an amorous mood in the period after giving birth, and Glenn is just like any other regional manager who struggles with horribly conflicted emotions.

Additionally, the climatic Christmas party seems like any other '70s-style fete, complete with previously repressed tears and recriminations.

The extras include a making-of feature, deleted scenes, and a gag reel.

The epilog to this entry in the reviewer's log is that "Station" aims for the stars and gets stuck in the valley. This makes it a great film for fans of "Knot's Landing" and other suburban-based soaps but not so much for fans of quirky space fare such as "Buck Rogers in the 25th Century" or the unfairly failed sitcom "Quark."

Anyone with questions or comments regarding "Station" is welcome to email me; you can also connect on Twitter via @tvdvdguy.