'Deliver Us From Evil:' Supernatural Thriller as Ebola Analogy 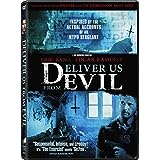 Sony Pictures Home Entertainment is providing perverse freaks of all ages a great Halloween treat in making the 2014 supernatural thriller "Deliver Us From Evil" available on DVD, Blu-ray, and VOD available beginning October 28 2014.

The fact that this movie about the biggest otherworldly evil to hit New York City since The Ghostbusters last strapped on their proton packs is based on the real-life experiences of NYPD Ralph Sarchie adds to the wonderful creepiness in this one. Having one of the scariest modern movie monsters does not hurt.

The pedigree of director Scott Derrickson including the modern horror classics "Sinister" and "The Exorcism of Emily Rose" is further proof that the audience is in the hands of an expert.

The following clip, courtesy of "YouTube," of the trailer for "Deliver" is so creepy that it alone will cause chills to run through your body.

The film version of Sarchie, well portrayed by Eric Bana of the "Star Trek" and "Hulk" reboots, gets involved in the creepy action through investigations that involve full moon style insanity and a few creepy incidents.

Sarchie first meets our possessed villain in the aftermath of an incident at the Bronx Zoo that involves the aforementioned insanity and creepiness. The chase through a dark area inhabited with all manner of wild beasts is especially effective, and the ensuing threat is just as good.

Another great scene has a skeptical Sarchie making a disturbing discovery while searching a dark basement in a creepy house. Although this scene includes some cliches, the filmmakers nicely create suspense and keep the thrills coming. The same is true regarding a pursuit of the aforementioned ghoul in his apartment building.

Horror hits closer to home regarding the involvement of Sarchie making his young daughter a target; the familiar means of terrorizing a child are surprisingly effective.

The indications that the devil is making the affected persons commit their evil deeds brings cool (but rather unorthodox and imperfect) priest Father Mendoza into the picture. Mendoza offers great commentary regarding what justifies calling someone a saint and his commenting that he is like Sarchie and the other cops in that he works undercover is one of the best in the film.

Further, simply pairing a tough cop with an equally rugged priest makes for great storytelling regardless of the context in which they interact. Both getting the chance to save the bacon of the other and to attempt a Winchester boys style exorcism is icing on the devil's food cake.

"Deliver" additionally is inadvertently scary regarding the home video releases coming out in the midst of the Ebola scare. The common element is that the initial evil, which originates in the Middle East, infects "patient zero" only to have it spread through contact. Also like Ebola, the folks charged with dealing with the currently infected and with curtailing the spread are not especially qualified for their tasks.

All of this amounts to a well-produced film with old school horror elements of "The Exorcist" and the '70s and '80s films with badly warped human monsters but enough of an edge and neo-gore to keep the kids off their iPhones long enough to watch the movie.

Anyone with questions or comments regarding "Deliver" is welcome to email me so long as you do not assert that you are sending the message from inside the house. You can also connect on Twitter via @tvdvdguy.