'For a Woman' DVD: The French Family Connection 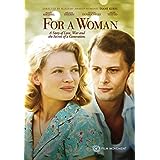 The 2013 French drama "For A Woman," which is the latest entry in the fantabulous Film of the Month Club  that uber-fantastic foreign film distributor Film Movement operates further proves that Movement can do no wrong. Like the plethora of other Movement films from virtually every country, the themes in "Woman" are universal.

Both "Woman" and its companion October 2014 Club title "Cannibal", which is exceptional even by Movement standards, are available on DVD to the general viewing public on October 21, 2014. One common element of both films is that a tailor is a central character in each.

As an aside, Unreal TV reviewed "Cannibal" when it hit theaters earlier this year.

The following clip, courtesy of YouTube, of the trailer for "Woman" includes spoilers in conveying the spirit and themes of this terrific film. This is particularly true regarding the more dramatic elements of the stories that "Woman" weaves.

"Woman" centers around the efforts in the 1980s of 30-something filmmaker Anne to piece together information regarding the life of her parents Lena and Michel in post-WWII France. This research is mostly depicted in the form of well-presented flashbacks from the mid-40s.

Providing many details regarding the compelling aspects of the less-than-ideal marriage of our central characters would ruin the impact of each well-presented revelation. Suffice it to say that the union is more "Who's Afraid of Virginia Woolf" than "Sleepless in Seattle."

Complications continue when Michel's long-lost younger brother Jean literally shows up on the post-war doorstep of the not-so-happy couple under circumstances that prompt well-founded suspicions.

This arrival ramps up both the marital conflicts and the larger intrigue in which Michel is involved and drags Lena. A wonderful aspect of all this is that much of it is very specific to that period in France.

Meanwhile back in the '80s, Anne is becoming increasingly involved with the fascinating life of her parents 40 years early while contending with the strained relationships with her father and her sister that add drama to the lives of many of us.

Additionally awesomeness comes in the form of showing those of us who think of our mothers as boring and mainstream individuals both that some of them have adventure in their past and that they do not always marry for assumed reasons. In other words, moms are people too.

Award-winning writer/director Diane Kurys nicely ties all of this together and keeps the action going until the final moments. She offers the additional bonus of giving "Woman" a title that delightfully has multiple meanings.

Movement deserves special credit as well for making a PERFECT selection for the bonus short film that accompanies every Club selection. The action in the incredibly fantastical and fantastic 20-minute French movie "Le Ballon de Rouge" starts in a French bar in November 1963 and weaves a modern-day folktale that spans several decades with scenes that seem very true to each depicted era. Further, the final scenes and literally last frame are perfect.

Anyone with questions or comments regarding "Woman" is strongly encouraged to email me. You can also connect on Twitter via @tvdvdguy.