'Star Trek: The Next Generation 'Chain of Command' BD: Terrific Blend of TNG and DS9 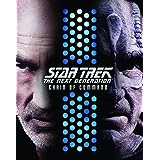 CBS Home Entertainment admitting Unreal TV to its federation of home video of review sites has netted the latter a review copy of the June 2014 Blu-ray (BD) release of the feature-film version of the classic two-part "Star Trek: The Next Generation" (TNG) episode "Chain of Command." Most trekkers and a large percentage of trekkies know that this episode first aired in December 1992 during the sixth season of TNG and roughly one month before the series premiere of "Star Trek: Deep Space Nine" (DS9).

As an aside, the "welcome" package from CBS also includes the BD release of TNG S6. A review of that release is scheduled for November 2014. Joining the Federation at this time creates excitement regarding the prospects of  receiving the BD sets of TNG S7 and the feature-film version of the uber-classic series-ending two-parter "All Good Things" before their December 2, 2014 release dates.

[Editor's Note: Unfortunately, a futile effort to find a spoiler-free trailer or clip of "Command" precludes providing this type of video tidbit regarding that release. Damn you Q!!]

The aforementioned Trek fans know that "Command" links TNG and DS9 by centering around the Soviet-like Cardassians who propel much of the action in the latter. This Cold War aspect of the Federation/Cardassian relationship makes for uber-awesome political drama that continues to the final minutes of "Command."

The action in "Command" commences with military power Starfleet ordering well-known Captain Jean-Luc Picard of the even better known flagship Enterprise to led a small covert operation that is designed to foil a Cardassian plot regarding which Starfleet has intelligence.

The effort being a "Mission: Impossible" style one regarding both the manner in which Picard and his team must execute it and the fact that Starfleet will disavow responsibility if things go awry requires that Picard relinquish command of his ship.

Good Trek drama unfolds regarding Starfleet choosing outsider Captain Edward Jellico, wonderfully played by highly seasoned character actor Ronny Cox, over well-liked and highly successful first officer Will Riker to succeed Picard. Jellico making drastic changes (including requiring that 'cheerleader in space' Counselor Troi wear an official Starfleet uniform), requiring an almost impossible level of work from the crew for no apparent reason, and not giving Riker or other Enterprise veterans much say in the matter does not help ease the unpopular transition. Whether resistance to the new ways of doing things is futile is uncertain through much of the episode.

This conflict leads to one of the best moments in the film that is reminiscent of "Rudolph the Red-Nosed Reindeer." Suffice it to say, Jellico must recruit an Enterprise crew member to guide his "sleigh" under very difficult circumstances after excluding said individual from the "reindeer games" aboard the ship. One spoiler is that said individual agreeing to help neither prompts any shouts of glee nor contributes to that pilot going down in history.

Meanwhile, things do go awry for Picard and his band. The ensuing physical, mental, and psychological torment that our intrepid hero endures makes the prior ordeal that he endures in the (Unreal TV reviewed) TNG two-parter "The Best of Both Worlds" seem like a walk in the park.

The two episodes further have the common element of having CBS release BD sets of feature-film versions of these episodes. The incredibly sharp picture and sound of BD and in-depth "making of" special features in these sets alone are very special for Trekkers.

Being able to watch these stories, and other TNG two-parters that receive the same exceptional treatment, as unified wholes without even the "to be continued" line halfway through and a "previously on" segment and opening credits of Part Two of the episode is beyond awesome. It really allows watching these episodes in the manner in which the folks behind TNG intend that they be seen.

Anyone with questions or comments regarding anything "Trek" is strongly encouraged to either email me or connect on Twitter via @tvdvdguy.