'The Longing' DVD: Guilty Pleasures and Secrets of Gay Boys From Brazil 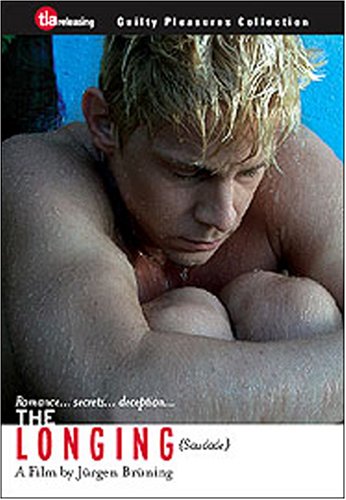 The apt diversity of  gay-themed DVD offerings from tla releasing, which is the (mostly foreign) indie film division of tla video, is well-illustrated in the 2003 Brazilian drama "The Longing." This one centers around hunky blonde 20-something German Erik (mostly) enjoying an extended vacation with Trust Fund Baby Cyrus and failed German rapper Tim at the luxurious vacation home in Brazil that the family of Cyrus owns.

Our boys of (mostly) leisure typically spend their mornings enjoying water sports, such as snorkeling and sailing. They take time in the afternoon to (ala the cash-strapped British blokes in the Unreal TV reviewed releasing film "Buffering") perform R-rated webcam shows to earn cash.

In the explicit telenovela spirit of "Longing," the fun and games take an abrupt dramatic turn one evening; an already moderately depressed Erik tries to lift his spirits (among other things) with a night on the town. His cruising nets him a local, but Mr. Right Now dies during their intercourse on a deserted beach. This provides an excuse for an extended montage in which a guilt-ridden Erik practically rubs himself raw in a Lady MacBeth style Silkwood shower complete with collapsing into the fetal position.

Erik additionally does not come clean with his friends with benefits who know that there's something about Erik but cannot determine the cause. The real and reel-lives of the group intersect when Erik meets Miguel, who acts on a soap that Erik watches.

The relationship between Erik and Miguel progresses nicely until Erik determines that a connection exists between his deceased trick and his current boyfriend. Erik is torn between longing to be honest with Miguel and not wanting to lose this love of his life.

This drama occurs in the background of race relations and the general status of black people in Brazil. Miguel, who is black, reinforces this by validating the belief of the three Germans that black actors are limited to roles that reflect stereotypes. These generally are athletes, rappers, and criminals.

In true telenovela style, Cyrus pursues his own surprising relationship and Tim goes native in his own manner. Meanwhile, Erik is going to great lengths to be with Miguel and to partially alleviate his guilt. All of this concludes with a degree of of telenbovelaesque ambiguity and a clear "to be continued" vibe.

The DVD extras include a "making of" feature.

Anyone with questions or comments about "Longing" is welcome to email me; you also can connect on Twitter via @tvdvdguy.