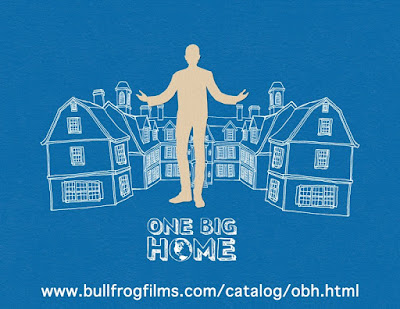 Bullfrog Films continues giving indie documentarians the forum their labors of love deserve with the November 2017 DVD release of "One Big Home" by Thomas Bena.

Bena engages in one of the world's oldest professions of going from carpenter to activist by trading in his hammer for a camera in response to his increasing distress regarding collaborating with transforming Martha's Vineyard from the natural retreat that compels him and many other people who fall fairly far on the counter-culture end of the societal scale to live there into a McMansion laden vacation spot for one-percenters.

The following YouTube clip of a trailer for "Home" provides visual proof of the scope of the issue; what seem to be sandbags on the shore below one of the included large houses indicates the issue of the probability of this construction making it likely that the owner ultimately will own vacation property in Atlantis.


The best segment in this educational and entertaining film is a 20-minute bonus interview that is a DVD extra. While conducting a follow-up interview with local architect Peter Breese four years after completing "Home," Breese states the truism of any film of this nature that it raises valid issues but still is "documentary propaganda." This reflects the oft-stated Unreal TV tenet that even productions that support your perspective are propaganda.

An opening scene in which Bena makes a visit to a construction site seem like a wartime reconnaissance mission only to be chased on off in a moderately threatening manner is a prime example (and a Michael Moore staple) of the point of Breese. Another nice aspect of this interview is that it is civil on both sides, and Breese states that the film prompts him to reconsider his prior viewpoint that the client is entitled to what the client wants and that building a home of any size allows an architect to see his or artistic vision come to life.

The impact of "Home" should be greatest on those who share the love of the undeveloped and small-town aspect of Martha's Vineyard. The most relevant personal experience regarding this relates to a particular find during an August 2015 visit. This exciting discovery is a literally tree-lined street of relatively small early 20th-century cottages that a church group apparently controls. Most doors were open and most of the congenial occupants were on their front porches. This is the spirit of the island.

The overall build-up of retail shops is less good, but gems remain. One location allows fans of 50s-style grocery stores to see one. A sense of community comes in lining up 30 minutes ahead to buy ultra-fresh tasty tasty doughnuts from a local shop.

Maintaining extended eye contact with a seal in the harbor is another highlight.

The story of the over-development of Martha's Vineyard also is highly relevant to the same trend in Newburyport, which is an upscalish tourist destination/former long-term home of your not-so-humble reviewer. The fact that the mostly working-class folks whose history with Newburyport dates back to the '50s or early call the "rich jerks" who are responsible for gentrifying the town "immigrants" speaks volumes. They face the Martha's Vineyard problem of their ancestral community no longer being affordable for them and their children.

A second personal experience nicely illustrates a primary point of Bena and further shows that Father (often) knows best. I had found a house that I really liked but was concerned that it was on the outskirts of Newburyport and asked my father for advice regarding it. He asked in a friendly manner why I wanted to live in Newburyport, and my response included that it was because of the (now diminishing) quaintness of the downtown. He then responded that I wanted to live in Newburyport because it was not like every place else.

The conversation with Dad both prompted limiting my search to the historic district and ultimately to purchase a house roughly 1/2 mile from the aforementioned retail district. That aspect of moving is the second most missed part of no longer living there; not being able to visit dog friends at those business is first.

Ongoing efforts by Newburyport pro-development "Mayor-For-Life" Donna Holaday to facilitate a mixed-use development by the local MBTA commuter rail (i.e., Trans-Siberian Railroad) station perfectly illustrates the risk of this smallest city in Massachusetts further losing its appeal and the conflicting positions that are at the heart of "Home."

Many TSR stations have the proposed developments, all of which look very similar; the prospect of coming home from Boston to a station that looks like every other stop along the line was distressing. The current certainty of a large bus terminal right downtown is even worse.

The parallels between the Vineyard and Newburyport are obvious from the beginning of "Home." Bena documenting a protest targeted at preventing a MacDonalds on the island is comparable to a failed effort to block a Starbucks in Newburyport.

The Newburyport aspect of this review concludes with summarizing the efforts to curtail the same types of "evils" on which "Home" focuses. These undesirable practices include infilling by building a second home on a lot on which only one has stood for 100 years or more, converting single-family homes into condos, and demolishing historic homes to construct new ones.

The copious aerial maps in "Home" objectively show both how building the large seasonal homes displaces the more proportionate houses in the area and reduces the undeveloped portions of the island.

Many of the talking heads in "Home" are the friends (including fellow carpenters) and neighbors of Bena who share his views. His two heavy-hitter interviewees are seasonal residents Mike Wallace of "60 Minutes" fame and director Doug Liman of "The Bourne Identity" and "Swingers."

Bena allows both sides to have their say and includes a segment on an "immigrant" who successfully restores rather than tears down and expands. We further see that the one-percenters are not evil and have many valid reasons for building their homes; it is arguable that an eight-car garage is excessive on a very walkable and bikeable island on which a ferry is the only means for bringing a car from the mainland.

The underlying conflict on Martha's Vineyard, in Newburyport and the numerous other communities facing the issue of the aspects that make a town desirable prompting development that hinders those elements is the right of the "haves" to use their wealth in a legal manner that gives them pleasure versus the privilege of the "have lesses" to maintain their quality of life. The fact that Bena and Breese calmly discuss the relevant issues provides hope that we all can get just along.

Anyone with questions or comments regarding "Home" is strongly encouraged to email me; you also can connect on Twitter via @tvdvdguy.