'My Art' Theatrical: Real-Life Mother of Lena Dunham Plays A Golden Girl of the Art World 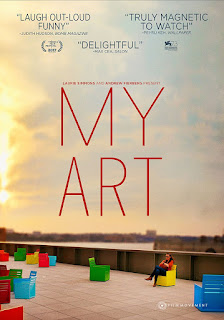 Global indie film god Film Movement goes to the movies to bring the feature-film debut of acclaimed artist/real-life Lena Dunham mother Laurie Simmons to general audiences. The semi-autobiographical "My Art," which also can be considered "How Ellie Got Her Groove Back," currently is playing at the Quad Cinema in New York and opens in Los Angeles on January 19. Folks who cannot see "Art" on the silver screen can purchase the DVD starting January 30, 2018. One spoiler is that Darth Emo literally and figuratively is nowhere in the picture.

Producer/director/writer/star Simmons plays 62 year-old almost has it all artist Ellie Shine. She is a well-respected and well-liked New York art professor, has numerous good friends in the art world, and enjoys a mutual strong bond with her adorable aging dog Bing. The absence of a prominent career as an artist bothers her far more than never having had a human child or anyone putting a ring on it.

An early scene with Dunham both is very true to the persona of that "girl" and central to the theme of art. Dunham plays a highly successful former student of Ellie who is meeting this professor near the end of the academic year. The Dunham character complaining about the toll of being the current "it" artist clearly evokes mixed feelings in Ellie. This educator is very happy for her former student/current friend but also feel envious regarding not achieving the same fame.

This conversation also provides the context for the exposition that Ellie is spending the summer at the country house of one of her aforementioned celebrity artist friends. Her goals include artistic inspiration that is designed to reignite her soul and hopefully to garner her the 15 minutes of fame that has eluded her since the Carter administration.

Events early in the new adventure of Old Ellie shape the rest of the summer (and the life of our lead.) Watching vintage movies, meeting landscapers/actors Frank and Tom, and an "its complicated" relationship with romance-challenged attorney John inspire Ellie to focus her artistic energy on recreating scenes from classic films. The most bizarre of these odd videos aptly is from the Kubrick film "A Clockwork Orange."

Simmons puts her artistic talents and good film making instincts to good work in presenting this modified Midsummer Night's Dream in a positive light. Ellie brings a breath of fresh air to the small community and helps the repressed folks there greater enjoy their lives. This is especially true regarding the traditional euphoric end-of-the-summer blow-out before the real world invades.

"Art" deserves good credit for contributing to art returning to the movies; it is a character-driven story of a world populated by "real" people facing "real" issues. It also is thought-provoking in a positive sense regarding the role of older women in the art world and in general society. The main character seemingly following the philosophy that she needs a man as much as a fish needs a bicycle adds an interesting element.

This strong central woman and Simmons playing every major role on both sides of the camera further raises feminist issues. The fact that every woman in "Art" comes across better than every man (all of whom look foolish to a varying degree) may reflect the feminist viewpoint that women are the stronger sex or may be the response from watching "Art" from a male perspective. Of course, an alternate feminist perspective is that we all are equal. Either way, seeing "real" people on the silver (and 4K) screen is very nice.

Anyone with questions or comments regarding "Art" is strongly encouraged either to email me or to connect on Twitter via @tvdvdguy.