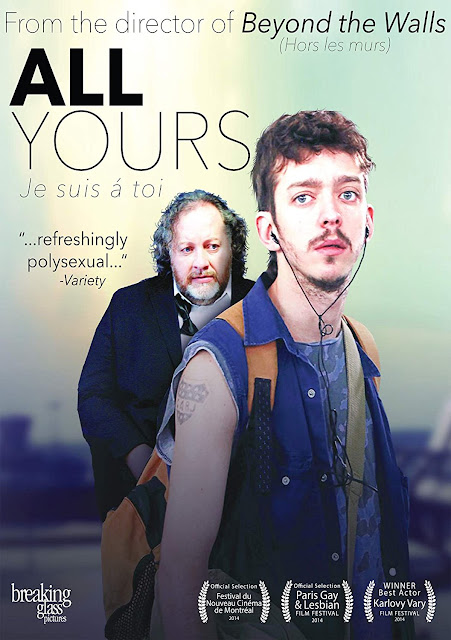 This entry in an ongoing series of reviews on vintage DVD releases from Breaking Glass Pictures hits the Breaking trifecta. The May 2015 release of the 2014 Belgian drama "All Yours" is edgy, tackles a controversial subject well, and shows that the gay experience is no different than that of the remaining roughly 90 percent of the general population.

The Breaking legacy of this film about 20-something Argentinian hustler Lucas using his mancam activity in his native land to seduce grossly overweight "daddy" Belgian baker Henry to pay his way to Belgium begins with the similarly themed (Unreal TV reviewed) "Bwoy" starring current "Star Trek: Discovery" lead Anthony Rapp; this commonality goes on to center around topics that are just as controversial as the loving gay brotherly incest in the (also reviewed) Breaking film "Godless."

The numerous accolades for "Yours" include best picture awards at the 2014 Cheries-Cheris festival and the 2015 Milan International Gay and Lesbian Film Festival.

The primary relatable element this time is not sexual; it reflects the reality of families inviting feral 18-22 year olds into their homes to work as au pairs or support staff for a year in exchange for an opportunity to live for free in another country. The almost inevitable conflict quickly erupts when the student realizes the extent of the expected work and the family realizes that foreign post-adolescents are not any more responsible or hard working than their domestic peers. In other words, both sides soon discover their incompatible mutual goals of getting the largest possible benefit for the smallest possible investment of financial or sweat equity.

The central conflict in "Yours" is that Henry reasonably thinks that buying Lucas a plane ticket and pledging to provide him room and board purchases a partner in bed and a bakery apprentice. For his part, Lucas seems to think that he is adequately young and cute to get away with doing minimal work and occasionally having sex with Henry.

Reality once again sets when Lucas has a series of mishaps at the bakery; the most discouraging one for him to experience and for the audience to watch is to see him struggle with a huge mass of bread dough that may outweigh him. However, the award for best scene set at the bakery goes to a sequence in which a gleeful Henry sings about his love for military men while pirouetting around in a manner very reminiscent of the ballet dancing hippos in the Disney film "Fantasia."

The scene with the bread dough become particularly symbolic later in the film. Lucas finds himself massaging the mounds of fat on the back of Henry in an effort to appease that sugar daddy.

The many complications that strain this personal relationship based on money extend well beyond Henry lacking the sensitivity required to deal with a young prostitute who essentially finds himself imprisoned far from home. Lucas developing a friendship (and hoping for more) with young bakery cashier/single mother Audrey greatly complicates things.

Writer/director David Lambert truly shines regarding this triangle in a series of scenes set at an arcade. Henry rebuffing a request from Lucas for a nominal sum requires that this young man whom the audience already knows does not suck dick for the fun of it literally take a (very ugly) one for the team under exceptionally humiliating circumstances. This leads to Lucas making an even larger sacrifice to fund an evening out with Audrey.

The copious additional drama that ensues also affects the Henry/Lucas relationship in manners that often lead to one of the men being desperate enough to make a grand gesture to the other one. This culminates in a development that changes everything in a completely unexpected manner.

The impact of all this stems from the characters largely being real. Middle-aged people all along the sexual spectrum find themselves alone, and many of them crave the company of someone younger and cuter than them. For their part, these younger and cuter folk are willing to doing things to varying extents to get the benefits that older less cute people provide. Somewhere in the middle are folks who simply strive to provide their kids a good home and who feel that they must be careful about whom they let in their lives.

Breaking further stays true to form in including an apt short film with "Yours." The 2009 Lambert short film "Live a Bit Longer" opens with a cute young gay couple in bed only to have one of he boys have to get up to help his father downstairs in the family bakery. That leads to a scene in which the father walks in on the boyfriend at that worst possible time that is hilarious to the audience because it happens to someone else.

This rude awakening leads to the father and the boyfriend awkwardly bonding in a scene that involves very symbolic use of a scale.

Both films having strong live-stage vibes reinforces the skill of Lambert at communicating his vision to both his cast and the audience.

Anyone with questions or comments regarding "Yours" is strongly encouraged either to email me or to connect on Twitter via @tvdvdguy.