'In Her Name' DVD: Compelling Ripped From Headlines Docudrama on Case of Rape-Murder of 14 Year-Old Girl 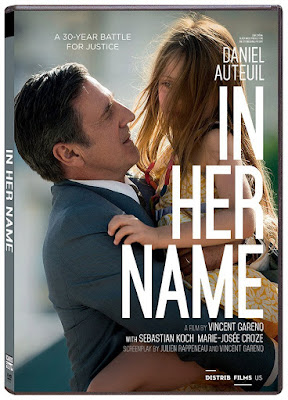 Icarus Films awesomely blurs the line between its history distributing "innovative and provocative" documentaries and its current mission of releasing DVDs (including documentaries) of "films from independent producers worldwide" with the January 16, 2018 release of the 2016 docudrama "In Her Name" (nee "Kalinka").

The "docu" part comes from basing the film on the real-life 30-year campaign of accountant Andre Bamberski (Daniel Auteuil) to have the French legal system hold Dr. Dieter Krombach responsible for  the rape and murder of the then 14-year old daughter of Bamberski.

The following YouTube clip of a trailer for "Name" looks like a promo. for a major Hollywood thriller because the real events are straight out of that genre. They also show that there is not always a difference between fact and fiction.


The trifecta of globally related elements make this one very relevant to every viewer. The sexual violation and related killing of a young teen girl sadly is relatively common. The associated elements of the rapist-killer being both a stepfather and someone with whom Andre spouse Dany had an affair also is not unheard of. The final aspect of this is Andre never giving up his cause despite all that it costs him. In other words, most of these actual events are not unique either to this case or to the countries in which they occur.

The film starting near the end of the story with the modern-day arrest of Andre for taking the law into his own hands is an example of a pet peeve of film critic Leonard Maltin; Maltin is critical of what he thinks is virtually every film made during the past few years starting with a dramatic scene and quickly cutting to another scene with an inter-title along the lines of "two weeks ago."

In the case of "Name," the action shifts from 2012 to 1974. Writer-director Vincent Garenq legitimately does so to strike the proper balance between exposition and quickly grabbing the audience. This relates to providing folks who do not know this story information about how the relationship between Dieter and Dany leads to the rape-murder.

The flashback brings us to 1974 Morocco where the young daughter of Dieter and her classmate Kalinka Bamberski are friends. Dieter soon seduces Dany into including benefits in their friendship, and she subsequently confesses that affair. That adultery prompts the Bamberskis to move back to France. A creepy scene as they are preparing to leave Morocco provides the first sense that the evil side of Dieter extends beyond seducing a married woman.

The affair (and the deception) continuing leads to the Bamberskis divorcing. The circumstances of the events that trigger the 30-year quest of Andre are shocking and sadly relatable. He knows that Kalinka and her brother are in Germany with their mother and now step-father Dieter. He does not expect to get a telephone call telling him that Kalinka is dead.

This is akin to a relative either suddenly getting sick or going into the hospital and then dying either during the proceeding or in the period following that stay. The story almost always either is that the doctors do not know what occurred or that they do know but they are not negligent.

Andre learns on arriving in Germany that the cause of death is unknown; he is told that Kalinka is discovered the morning after an uneventful night and that Dieter is asserting to have given her injections and taken other measures to save her.

Andre pushing hard to get the autopsy report both provides more information regarding the condition of Kalinka at the time of her death and indications that that exam is incomplete. The strong implication is that the medical examiner is protecting one of his own.

This leads to 30 years of Andre seeking to hold Dieter responsible only to always have defeat snatched from the jaws of victory; this includes obtaining a favorable judgment from a French court only to have it not be enforced and a German court proceeding regarding a teenage girl accusing Dieter of a similar form of rape as Kalinka only resulting in jail time through the relentless efforts of Andre.

These efforts and Andre constantly petitioning the court system and government officials for relief deplete both his financial resources and his personal relationships. This puts him in good company with countless real, reel, real-reel crusaders who continue pursuing a just and righteous cause long after 99 percent of us would have abandoned it to preserve our assets, our connections with the important people in our lives, and our sanity.

Andre hiring thugs to grab Dieter and essentially drop him at the door of the police station leads to the events from the opening minutes of "Name." We then see Andre as a guest of the state and facing several years of incarceration for doing what seems to be the job of the legal system.

Both modern filmmaking and the common flaws of legal systems around the world make it equally likely to those who do not know the actual events that inspire the movie that Andre will be a martyr, that Dieter will be jailed for his crimes, or that there will be some combination of the two. You need to watch to find out but are sure to feel emotion regardless of the conclusion,

Anyone with questions or comments regarding "Name" is strongly encouraged either to email me or to connect on Twitter via @tvdvdguy.