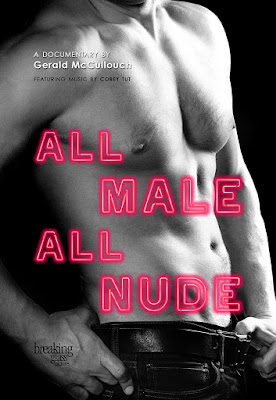 The December 5, 2017 Breaking Glass Pictures DVD release of the 2017 dickumentary "All Male All Nude" easily wins the 2017 award for the film title that best describes its concept. Like the vintage review on the Breaking release of the comic documentary on penis enlargement "Unhung Hero," this post on the film by Gerald McCulloch about the dancers at the Atlanta strip club Swinging Richards contains copious humor regarding male genitalia. The distinction of the club is that it is the only one in North America other than a similar establishment in Canada in which the men go Full Montreal.

The following YouTube clip of the official trailer for "Male" lets it all hang out and includes some of the best moments in the movie.


This pure cinema verite film free of any narration or talking heads (no pun intended) lets the performers and the guys whose jobs do not require dropping trou tell their tales; the main subject is mid-20s single-dad Sean, who is well-endowed with a strong sense of responsible. He shakes his ample moneymaker (which receives a great deal of screen time) at night to keep his five-year-old son in the style to which peer pressure requires that he become accustomed.

Sean discussing the hiring process at the club is one of the best moments in "Male" if only because it provides an opening for showing an actual ruler that is used when determining if a candidate is one of the chosen people. Suffice it to say that "ass" plays a role that extends beyond the rear end of the wannabe.

We also meet younger guy Matt, who is in it for all the extras that the lucrative field of nude dancing can provide. He describes his sexuality as mostly straight with an element of what he asserts is universal curiosity.

What we learn about philosophical Steven during the "where are they now" portion at the end of "Male" makes him the most sympathetic of the lot. Beyond that, he has one of the best perspectives of the boys.

Other "magic" men include student Pierce and Dallas, who is in a committed gay relationship. The most wholesome and adorable boy is a guy whose career is due to his girlfriend saying that he has a hot body that can make him good money.

Like all good documentaries, "Male" educates as much as it entertains. Some of the interesting stories about the conflicts in this family are unexpected and provide good insight. An example is that it seems that an inverse relationship exists between the extent to which a performer is a big dick and where he measures up on the aforementioned ruler. We further learn of other bases regarding which dancers have jealous.

Pierce provides additional amusing information regarding regulating where dancers can place their garters for collecting tips; of course, gratuities cannot be placed near coin purses.

Hearing of the activities that provide training for the work likely will prompt many gay men who worshiped the top jock at their high school from afar to run (not walk) to the nearest all-male strip club.

A sad story reflects one of the traps of this work; we further only get a general sense of the extent to which customers take matters into their own hands or the proper response when these patrons get cocky, all of whom are a handful.

The manner in which McCulloch presents all this effectively communicates his messages. The first is that most guys who wear their birthday suits to work fall in the middle of the spectrum of society. They typically do not choose that work either out of dire desperation or use it as a facade to be an American gigilo. They simply do a cost-benefit analysis and decide that baring all is worth having more than the bare necessities. As a practical matter, an strong argument exists that earning at least as much dancing naked for a few hours as you would make flipping burgers for a week makes sense.

Getting to know these guys also gives men and women who enjoy looking at attractive men in various states of arousal dance naked the same cause to think as does remembering that female strippers have close family members.

The plethora of extras include the original uncensored (i.e., uncut) short and a few music videos. Highlights of the short include hearing how Pierce responds when he gets a hair across his ass and a shot of the hands-on approach of some dancers in preparing to go onstage.

Anyone with questions or comments regarding "Male" is encouraged either to email me or to connect on Twitter via @tvdvdguy,