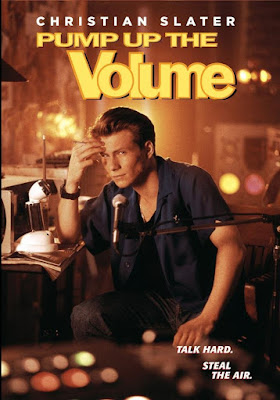 Warner Archive proves that it knows its fan-tastic audience regarding the November 7, 2017 DVD release of the 1990 Christian Slater drama "Pump Up the Volume." The same Gen Xers whose love of the Golden and Silver Ages classics that comprise a large portion of the Archive catalog comes from watching these gems on PBS and independent stations during the weekends in the '70s and the '80s loves discovering the outsider/Jack Nicholson persona of Slater in "Heathers" in 1988 that he repeats in "Volume."

This dark version of "The Breakfast Club" centers around transplanted New Yorker new boy in town Mark Hunter, who has a very unhappy existence in the obviously planned Arizona community where his father moves his family to take a job as the school superintendent. Picturing Jack Nicholson living in an neighborhood in which there is no divorce, every lawn is perfect, and a picket fence borders every identical lot provides good insight in to the psyche of Mark.

Bespectacled mild-mannered loner student Mark gets his outlet in a manner very consistent with the paranoia-inducing propaganda "Its 10:00 o'clock; do you know where your children are?" This Clark Kent by day and capeless crusader Hard Harry Hardon by night chooses this time to remove his glasses and fire up his shortwave radio set. (Harry does symbolically keep his glasses on for one broadcast.)  He then uses his illegal pirate radio signal to become the voice of his peers.

This free-wheeling show discusses the unhappiness of Harry in his new surroundings, standard topics of teen angst, and the sins of the administrations at Hubert H. Humphrey High where he quickly becomes a Triple H threat.

Teen idol Harry increasingly inspiring graffiti, questioning of authority, and other rebellious acts at school proportionately pumps up the campaign to pull his plug.

A somber aspect of this involves a tragedy regarding which Harry plays a role. This incident aptly sobers Harry but does not stop the signal for very long.

All of this escalates to a frantic chase between a then mobile Harry and FCC tracking vehicles. Seeing James Hampton of "F Troop" play aptly named overwhelmed FCC executive Arthur Watts is a fun aspect.

The appeal of all this extends beyond seeing Slater utilize the persona that best suits him to the film raising timeless issues and prompting thought. Further, the end is a mixed bag of successes in that not everyone gets a happy ending but some justice is achieved.

Anyone with questions or comments regarding "Volume" is strongly encouraged either to email me or to connect on Twitter via @tvdvdguy.