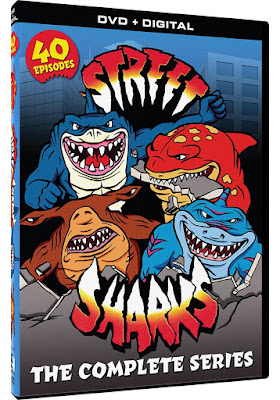 Mill Creek Entertainment sinks its teeth into the campaign to introduce Millennials and Gen Zers to the spectacularness that is Saturday morning (and after-school) cartoons with the January 16, 2018 DVD & Digital CS release of the 1994-96 animated series "Street Sharks." This "Teenage Mutant Ninja Turtles" series for the older brothers of fans of those heroes on the half-shell are fintastic and should create a sharknado of excitement for fanboys everywhere.

The four titular shark-frat boys mutants are the Bolton Brothers, who are the sons of research scientist Dr. Bolton. These popular lads cover the gamut of post-adolescent males in having the studious genius, the jock, the slacker, and the skate rat.

Paradigm then tricks our heroes into coming to his lab. He soon straps them down and continues his experiment with the goal of making them his super-powered henchsharks. Not adequately thinking things through results in these new mutants using their mad scientist given powers to break free and subsequently give Paradigm prolonged tremendous grief.

Following the scientific principle that each action has an equal and opposite reaction, Paradigm creates the first of two evil Seaviates to do his bidding. The third time is the charm in that the menacing Killamari (a squid hybrid who shoots lethal projectiles) soon joins his older brothers, who are a swordfish with a new-and-improved nose and a monster lobster. A late-comer to the party is more jawesome in that he is an eager volunteer with a grudge against our boys in sharkskin.

Team Sharks also quickly gets some allies. Research assistant/double agent Lena continues working for Piranoid while secretly helping the boys. Honorary Bolton bro/valley boy genius Bends becomes the guy in the chair who invents the hi-tech gear (available in toy stores everywhere) that our heroes use in their quest to bring down their nemesis.

Future allies include a rocker who pays a high price for mooching and another pre-mutation Bolton chum who is the center of a cautionary whale of a tale about steroid use. Meanwhile, it becomes increasingly clear that Dr. Bolton still is in the game.

The appeal of "Sharks" extends well beyond the amped-up college bros reveling in their new powers, such as shark dives that allow going underground and speeding down roads as their fins rip up the pavement above them. Most episodes are part of extended story arcs that compel marathon viewings. The first of these revolves around a Piranoid plot to literally poison the well (and the Kool-Aid) to create an army of Seaciates that he can control.

The S2 season-finale has the Sharks discover fellow good-guy mutants and get more news regarding their father. This sets the stage for things to get weird in S3. Copious time-travel is only the tip of the iceberg.

Anyone with questions or comments regarding "Sharks" is encouraged either to email me or to connect on Twitter via @tvdvdguy.