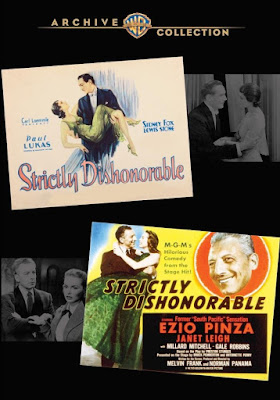 Warner Archive terrifically goes old school in returning to its roots of (often simultaneously) releasing multiple versions of classic films; the November 28, 2017 single release of the 1931 and 1951 versions of the Preston Sturges film "Strictly Dishonorable" harkens back to the (reviewed) separate Archive releases of the Joan Crawford and Norma Shearer versions of "The Last of Mrs. Cheney." Both "Dishonorable" films are based on the Sturges Broadway hit of the same name.

The general "Dishonorable" story is that transplanted Southern belle Isabelle and loutish Jersey boy fiance Henry stop by a '20s-era New York speak easy only to have Isabelle stranded there at the mercy of the literally resident opera singer/Lothario. Although trying to decide which version is "better" is akin to asking a parent to identify a favorite child. The 1931 version likely is truer to the play, but the 1951 film is more amusing.

The 1931 "Dishonorable" has the live-stage vibe that reflects early films. Opening scenes have Isabelle and Henry bickering in a car and retired Judge Dempsey (Hollywood royalty Lewis Stone) arriving at the aforementioned watering hole with an intent to go to his upstairs apartment but succumbs to the temptation to stay downstairs for one drink. Our unhappy couple and famed opera singer Tino "Gus" Caraffa arrive in due course.

The ensuing hilarity leads to Isabelle recognizing Gus as her idol and ultimately infuriating Henry to the extent that she experiences the aforementioned dilemma. This leads to Gus convincing her to engage in the "dishonorable" act of sleeping in his upstairs apartment. This, in turn, prompts what is not necessarily an indecent proposal.

The 1951 version seems more typical of Sturges films that include the (reviewed) awesome "The Miracle of Morgan's Creek" and the even more spectacular "Sullivan's Travels." As the text on the back cover of the "Dishonorable" DVD explains, shifting much of the focus to the opera career of "Gus" reflects a desire to utilize the exceptional singing talent of Ezio Pinza of "South Pacific" fame. Casting Janet Leigh as Isabelle proves that she is equally adept at broad comedy and drama.

This one pays indirect homage to "Citizen Kane" in having Gus brutalize a horrible aspiring opera singer at the risk of incurring the wrath of her tabloid-owning husband, who does not hesitate to use the power of his press to ruin his enemies. The blatant yellow journalism directed at Gus is funny because it sadly is true.

Isabelle literally enters the scene as an extra whose case of being star struck leads to hilariously almost literally bringing down the house. This leads to her coercing Henry into driving to the aforementioned gin joint so she can apologize to Gus. Smelling a honey trap prompts Gus to play along to the extent of making an honest woman of Isabelle.

The twist this time is that Isabelle wants to stand by her man and enlists the aid of "Mama" in this campaign. Her obstacles include public opinion and a designing woman with a powerful friend.

Common memorable moments from both films presumable date back to the stage play. The strongest "true dat" scene has a now unlikable Henry comment that every man is on his best behavior until putting a ring on it justifies reverting to his actual loathsome self. On the other side, Henry also points out that Southern belles mistakenly believe that the sun only rises to please them.

The bigger picture is that both films are sufficiently entertaining and different to warrant an awesome double feature.

Anyone with questions or comments regarding "Dishonorable" is strongly encouraged to email me; you alternatively can connect on Twitter via @tvdvdguy.