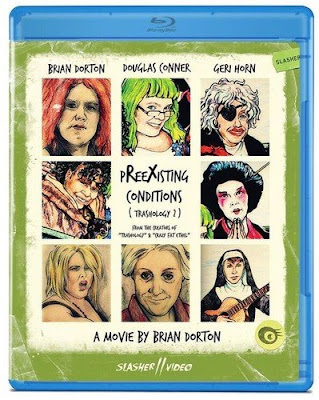 The Olive Films January 30, 2018 Blu-ray release of the pure indie 2015 comedy "PReeXisting Conditions (Trashology 2)" is another example of Olive introducing an obscure film that most of us miss at the theater. "Conditions" can be considered the homage of writer/director star Brian Dorton to King of Filth John Waters and ground-breaking (oft-cross-dressing) Canadian comedy troupe The Kids in the Hall. The Blu-ray cover art mimicking the famous "Brady Bunch" opening credits by putting images of the freaks who inhabit the "Conditions" world can be also be consider a nod to a North American classic.

Although watching "Trashology" helps follow the action in "Conditions," doing so is far from crucial.

The following YouTube clip of the "Conditions" trailer excels regarding the purposes of these promos by perfectly presenting the themes and the tone of the film.


Dorton plays comically big-boobed red neon-haired white trash Katrina; her best friend is big-boobed green neon-haired white trash Melissa.  Their "novel" adventures begin with Melissa getting excited about her record-breaking six-month anniversary dating boyfriend Carl. The girls going to visit Mr. Right leads to one of their first adventures that requires that Melissa must decide whether to stand by her man or to create a who's Sony now situation.

An attempted sexual assault (involving large jugs) at a grocery store sets the primary action in the film in motion. The would-be-assailant and his buddy tracking down the girls leads to an incident that causes the women to flee.

Meanwhile the black friend of the girls Clitty Hyman has her own man trouble.  A redneck is delighting in driving up to Clitty and making nasty racial comments followed by pelting her with fried chicken or watermelon. This woman subsequently taking the five-second rule to its ultimate degree is one of the most gross-out moments in this film that revels in being disgusting. Another memorable scene has a nun committing an almost vomit-inducing foul act. We further get a scene involving mishaps with a colonoscopy bag.

The literal door-to-door adventures in the film bring in another cult-comedy element by evoking thoughts of the "Harold and Kumar" franchise. These include seeking refuge at the home of a wheelchair-bound elderly woman with her own female troubles.

All of these elements (including the ensemble aspect) give "Conditions" a strong vibe of a subversive sketch series by a cast who are in it for the love of the game and who revel in creating shock value in an era in which we think that we have seen it all until watching this film.

Anyone with questions or comments regarding "Conditions" is encouraged to email me; you alternatively can connect on Twitter via @tvdvdguy.