'Surge of Power: Revenge of the Sequel' Theatrical:Gay Super Hero Returns to Save the World and Get the Boy 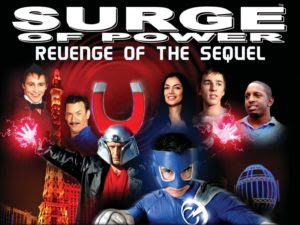 The Surge of Power Enterprises theatrical release of "Surge of Power: Revenge of the Sequel" is notable for the message that this film about out-and-proud gay superhero Surge sends. This arguably is the final frontier regarding gay-themed films that have broken the barriers regarding most genres. These movies teach the lesson that whom you love (or with whom you temporarily share your bed or the gym steam room) does not preclude having the same experiences and emotions as everyone else.

Folks in Los Angeles can see this film beginning January 5, 2018. It opens in New York (a.k.a. Gotham) on January 19 and subsequently has a broader roll out.

The following YouTube clip of the official "Sequel" trailer PERFECTLY highlights EVERY element that makes the film a good choice for escapist fun.


Fans of this franchise also can enjoy the television series "Surge of Power: Big City Chronicles" in which the titular hero interviews fanboy faves such as John Barrowman, Jack Coleman, and Kevin Sorbo.

A related note is that this awesome evolution means that a movie being gay-themed no longer should be a factor in deciding whether to see it; the aforementioned ubiquitousness now allows judging each production on the nature of the story and the quality of the production.

The appeal of "Surge" goes beyond proving that some ordinary and meta-humans who determine that fighting evil requires donning fetish gear prefer snails over oysters. It is an awesome throwback to the campy low-budget comedies of the '80s that provide numerous C-Listers with a day or two of work.

Both elements are prominent from the start as animated opening credits recap the events of the first film in the franchise "Surge of Power: The Stuff of Heroes." The glee-inducing cast list during the "Sequel" credits looks the lineup from the best ever "The Love Boat." The too-many-to-mention actors include Gil "Buck Rogers" Gerard, Linda Blair ("The Exorcist") Blair, Lou "The Hulk" Ferrigno, Rex "Street Hawk" Smith, t-shirt wearing comedy writer/"Hollywood Squares" guest Bruce Vilanch, etc. The most exciting stars from a fanboy perspective are Nichelle Nichols and Robert Picardo of "Star Trek" fame.

Roth shows both his meta side and the influence of Kevin Smith in including scenes in a comic book store in which the "guy" there introduces a fanboy to the Surge comics and in separate scenes in which many of the C-Listers appear as themselves to discuss these comics.

Recently released from an unfortunate incarceration, super-villain Metal Master  (nee Hector Harris) goes to a Big City gay bar with symbolic thoughts of going straight in his head. He first reverts to his true nature by spiking the drink of our titular hero (nee Gavin Lucas) (producer/director/writer Vincent J. Roth) for a purpose that is more nefarious than nabbing an unwilling bed partner.

Mythical evil-doer Augur (Eric Roberts) subsequently recruits Metal Master to take a Vegas (i.e., Sin City) road trip to use his special powers to recover a comically-named rare crystal that a nefarious scheme of Augur requires. This requires both that Surge follows in lukewarm pursuit and that he wear his costume while driving. These scenes further establish that "the guy in the chair" who provide Surge intel. and other support hilariously looks at more than data and is similarly distracted while doing his job. This should make fanboys wonder what occurs in the Watch Tower when no one is watching the team player there.

Surge pursuing Metal Master into the desert outside Las Vegas literally puts a tightie-reddie clad smooth blonde 20-something fan in the arms of his idol. This leads to a cute courtship that should prompt Batman and Robin to abandon their facade that does not fool anyone.

All of this unfolds in the aforementioned low-budget campy style that ultimately shows that you should not send a mortal to do a god's job. We further get to see that Superman going for Jimmy Olsen over Lois Lane does not prevent facing the same relationship-oriented challenges.

All of this demonstrates that being light in the loafers and being friends with Dorothy does not impact an ability to kick ass and save the day. It further proves that the conflict between wanting to do good and to share your bed with someone special plagues every boy in spandex.

Anyone with questions or comments regarding "Surge" is encouraged either to email me or to connect on Twitter via @tvdvdguy.