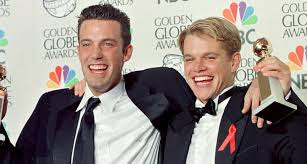 A once-in-a-lifetime chance meeting this weekend presented this little site that generally can a once-in-a-lifetime opportunity to scoop the big boys. Your (sometimes humble) reviewer and his oft-mentioned highly significant other were eating at the Newburyport, MA restaurant The Black Cow when we saw Matt Damon, his aunt (who lives in Newburyport), and other local members of the Damon family a few tables away.

Damon smiling and being done eating when I looked over prompted me to approach. The lack of any Jason Bourne style attack on reaching the table provided further encouragement to speak with Damon after several other Damons verified that the intrusion was alright.

The conversation  quickly turned to "Unreal TV" and the related campaign of this site to promote classic and neo-classic "escapist" sitcoms. Damon turning his smile up to the full wattage that we all know and love signaled that I had hit a nerve.

After pulling up a chair for me to sit next to him, Damon lowered his voice and shared previously undisclosed news of a joint project on which he and Ben Affleck were putting the finishing touches. He went on to state that he and Affleck discussed the same issues regarding the lack of good solid sitcoms over the Christmas holidays and developed a sitcom for which they subsequently dashed off  three scripts.

Damon next shared that NBC was at the beginning stage of casting the pilot and that the network had been keeping things quiet at this stage because of the recent run of failures regarding other high-profile sitcoms at that network. The aforementioned smile returned when Damon shared that even his paycheck for his cameo in Affleck's "Jersey Girls" earned him more than he was getting for the new sitcom but that it was a true labor of love.

The show is titled "Good Sports," but is not a remake of the 1991 Ryan O'Neal/Farrah Fawcett failedcom of the same name. It revolves around two high school buddies who are now in their mid-40s and co-own the struggling Good Sports sports memorabilia shop in South Boston. Damon promises that the show is full of Boston stereotypes but does not make them caricatures. Damon is mum regarding whether there are any references, ala "Good Will Hunting," to a character using a collectible baseball glove as a masturbatory aid.

Tidbits regarding the pilot include that former Red Sox general manager Theo Epstein guest stars as himself and that a handful of jokes regarding Epstein being very young when he got that job are directed at Damon and Affleck. Epstein comes into the shop looking for change for a parking meter only to have our leads, named Patrick O'Casey and Frank Angelo, sell the sunglasses that Epstein leaves behind. Hilarity ensues when Epstein returns for the glasses, which he reveals belong to an undisclosed individual whom Red Sox nation despises.

The final spoiler regarding the "Good Sports" pilot and series is that this entire post is an early April Fool's Day joke. Travels in the Boston area never include Damon sightings, and it is highly unlikely that the Boston bromancers will ever develop a sitcom.

Anyone with thoughts or comments on this post is welcome to email me; you can also connect on Twitter via @tvdvdguy.
Posted by Matt Nelson at 9:04:00 AM