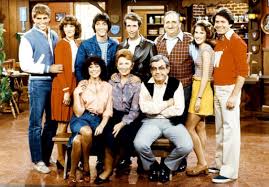 [EDITOR'S NOTE: This post marks the end of concentrated dark dysptopia-oriented essays on this site; we resume our more upbeat regularly scheduled program with an upcoming review of the Blu-ray release of the fourth season of "Star Trek: The Next Generation" this weekend.]

This wrap-up of this three-part look at our current dystopian society in the context of both the "Back to the Future" film trilogy and the '70s set in the '50s sitcom "Happy Days" touches on some current societal woes that the other essays do not address.

Part One of this series explains that the overall concept of these essays is that dystopia is rampant in 2015, which is the year in which much of the action in "Future" II is set, and shares related thoughts regarding how the Cunningham family of "Days" would fare in modern times.

Part Two focuses on the harsh economic realities that the Cunninghams would face in 2015. This clearly speculates that they would not be better off today than they were 60 years ago.

This (not-so-grand) finale shifts gears from a planned discussion on the state of the lives of secondary "Days" characters in 2015 to a more general "Days" oriented discussion of the national mood in relation to television series.

The sad fact is that the "reality" television that is prompting this site to promote "unreal TV" is so blurred with real reality that it seems that we are living in one of those bad '80s and '90s movies in which either fictional film or TV characters invade our world or folks from our reality get trapped in TV Land.

The following clip, courtesy of YouTube, of the hilariously spot-on spoof "The Real Housewives of South Boston" illustrates this point well, They are only missing one of the housewives slashing the tires of someone who moved her beer cooler out a shoveled out parking space and then parked there. (This vandalism is not funny, but is real reality.)

A friend expresses all this by stating that he does not watch reality shows because he does not want to spend his evening looking at the same lowlifes with whom he must deal in his everyday life. This goes to the point that watching the antics of the Cunninghams and most other classic sitcom ensembles provides necessary G or PG-level escapism that is largely absent from current original television fare.

A related aspect of all this is that the partisanship and general rancor that seem to have started with the controversy regarding the 2000 presidential election and that terrorist attacks, large-scale abuse of power by power-brokers on both side of the aisle, economic crises, etc keeping fueling in what seems to be a never-ending cycle a poisoning of the television well regarding "must-see" TV.

This dystopia is consistent with the depressing 2015 life of "Future" II lead Marty McFly, played by Michael J (Really A.) Fox. He lives in a dumpy house with a dumpy wife and dumpy kids, and makes ends meet by working a dumpy job. This seems to be the main thing that this film gets right about this dumpy year. (We will need to wait a few months to see if the Cubs beat the Marlins in the 2015 World Series.)

The Cunninghams would only make it on television these days if parents Marion and Howard were divorced, and the latter was a sleazeball who defaulted on his support obligations but spent a great deal on trashy new trophy wife Jenny Piccolo.  (Of course, hoots and hollers would accompany every appearance of Piccolo.)This would require that former housewife Marion become a sour "domestic goddess" who struggles to earn enough to raise their children Richie and Joanie.

Meanwhile, Marlon Brando/James Dean idolizing Fonzie would be a genuine gangsta who operates all manner of petty criminal activities from his garage and uses his friendship with the Cunninghams as part of his front for these "legitimate businesses."

All of this makes one pine for the idealized '50s of "Days" in which most people are supportive and kind, bullies are taken in perspective and receive apt comeuppance (rather than a brutal attack), and there is not a Kardashian or Honey Boo Boo in sight.

Anyone with questions or comments regarding any dystopian-related thoughts is strongly encouraged to email me. You can also connect on Twitter via @tvdvdguy.