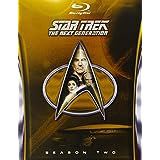 These thoughts regarding the 5-disc 22-episode CBS Home Entertainment Blu-ray release of "Star Trek: The Next Generation" Season 2 moves the focus of the "Year of Trek" reviews on this site from "Star Trek: Enterprise" to TNG.

Many Trekkers and Trekkies consider TNG S2 a large improvement over the personally loved S1 offerings and as the start of the quality episodes for which the series is adored. It is undisputed that S2 introduces several notable TNG aspects.

The fact that a proper review of the TNG sets requires both watching every episode to avoid missing a memorable one while presenting the related dilemma of selecting which few to highlight further speaks to the exceptional nature of this series. It is equally amazing that these episodes remain fresh and highly entertaining after no fewer than 10 viewings. It is highly likely that these episodes will find themselves being watched again in a few years.

Similarly, the unparalleled remastering of sound and audio in the episodes makes buying these sets in BD a necessity. (Your reviewer is literally putting his money where his online account is regarding that final statement.)

Following the tradition of these "Year of Trek" reviews, the chosen YouTube clip for this review is the trailer for the S2 BD release. The good folks at CBS show their usual good judgment regarding selecting scene and special feature highlights while also demonstrating that it all looks awesome in BD.


Introducing Whoppi Goldberg as sage bartender Guinan, who works in the Enterprise lounge known as 10 Forward validates critics who comment that the interior of this version of that iconic spaceship looks more like the Pacific Princess of "The Love Boat" fame than a spaceship.

The second season also sees Diana Muldaur join the cast as Dr. Katherine Pulaski. Pulaski replaces former ship "Doc" Dr. Beverly Crusher, played by Gates McFadden. Considering the fate of the character that Muldaur later plays on "L.A. Law," a scene in which Pulaski avoids using the turbolift on the Enterprise is hilarious.

Guinan and Pulaski first appear in the S2 season premiere titled "The Child," which involves one of the most immaculate conceptions and shortest gestation periods ever.

An early S2 episode titled "Q Who" achieves a trifecta in terms of featuring the wonderfully evil impish titular being, introducing the Borg to "Trek" lore, and involving the "Enterprise" theme of concern that humans are unprepared to handle what they find while exploring the universe.

Fellow early season offering "The Measure of a Man" is validly included in the "Best of" TNG DVD release from a few years ago. This one has android officer Lt. Commander Data literally fighting for his life in an adversarial proceeding to determine whether he is "property" that can be dismantled contrary to his will or a "person" with the right to protection against being torn limb from limb.

Your reviewer is very remiss in forgetting to watch the extended version of "Man" that the BD set includes as a special feature. Indications are that the additional footage is well worth watching.

The notable aspects of "Man" extend beyond the well-presented philosophical issue to which the title refer to the element of pitting Enterprise captain Jean Luc Picard against his first officer Commander William T (not Tiberius) Riker. In this case, they find themselves arguing against each other in the hearing around which the episode centers.

Picard and Riker also face off in the lighter S2 episode "Peak Performance" that has Riker competing against a Picard-commanded Enterprise in a war game. Much of the humor relates to Riker improvising in response to the physical condition of his temporary craft being far inferior to that of his mother ship. Throwing in a psychological problem for Data is a wonderful bonus.

The season ending " (Not 50) Shades of Gray" is a clever clip show that takes us into the mind of Riker. Iconic TNG moments from this one include a look at the first-season episode that introduces the concept that no primary character is safe from being written out, the equally memorable first meeting between Riker and one of his shipmates, and a hilarious S2 scene between Riker and woman in purple Guinan.

Anyone with questions or comments regarding TNG is welcome to email me. You can also connect on Twitter via @tvdvdguy.