'Star Trek:The Next Generation' S4 BD: From Borg to Klingons 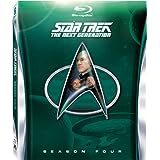 Returning to the series of "Year of Trek" reviews after diverting to bloggy style posts in the three-part "Back to Dystopia Days" series is very apt. A central theme of the entire "Trek" universe is is that civilization vastly improves following a period of despair and desperation. One can only hope that life imitates art.

This entry follows up the recent repost of a review of the Blu-ray set of "Star Trek: The Next Generation" S3 is on the BD release of TNG S4. This season starts strong with the season-premiere conclusion of the S3 season-ending cliffhanger "The Best of Both Worlds." Every Trekker and Trekkie alike almost certainly remembers the first time that he or she sees the truly chilling finale scene in the S3 portion of this episode. (An Unreal TV review of the BD feature-film version release of "Worlds" discusses this episode in detail.)

The following clip, courtesy of YouTube, of the spoiler-laden trailer for the S4 BD set nicely features a prevalent season-long theme, highlights humor in S4 episodes, and demonstrates the incredible audio and video quality of those episodes in Blu-ray.


The aptly titled S4 second episode "Family" has Enterprise captain Jean-Luc Picard and Klingon security chief Worf experiencing tough family reunions. Picard finds himself dealing with old resentments while visiting his estranged brother, and Worf experiences embarrassment regarding his adoptive human parents visiting the Enterprise. The introduction of Mr. and Mrs. Rozhenko helps set the stage for later episodes in the fourth season and subsequent ones.

The Work story line in "Family" is also a portent of the relatively Klingon-centric element of S4. Much of this revolves around the fallout from an S3 development that essentially has Worf taking one for the home team. All this nicely culminates in the S4 season-ending cliffhanger "Redemption" that has Worf effectively transferring from the major leagues back to the minors. The complex political intrigue in this one rivals that of many classic British dramas. ("Trek" video releaser CBS Home Entertainment has released a feature-film BD version of "Redemption.")

The theme of family continues in the early S4 episode "Brothers." This one has android science officer Data participate in an impromptu family reunion that involves the standard sibling rivalry and the competition regarding whom Dad loves best that seems endless in most families of all life forms.

This theme is also the subject of an S4 BD special feature titled "Relativity: The Family Saga of Star Trek: The Next Generation."

The themes of family and species-based torn loyalties continue in "Suddenly Human," which has the generally minor-phobic Picard becoming the surrogate father of an essentially wolf boy. Said Mowgli of outer space is a human teen who is raised by a non-Klingon warrior race on being adopted by a member of that species following a raid by those aliens on a human community. Suffice to say that the efforts of the Enterprise crew to literally reintroduce that lad (played by Tiger Beat cover boy Chad Allen) into human society do not go very smoothly.

Another pair of episodes nicely lay some groundwork for the upcoming "Trek" sequel series "Star Trek: Deep Space Nine." "The Wounded" puts the Enterprise in the tough spot of trying to maintain a fragile peace with the DS9 bad guys the Cardassians in the face of a Starfleet captain making seemingly unprovoked attacks on Cardassian ships. The overall deceitful nature of the Cardassians and the more specific indicators that they are up to no good only complicates things.

A second less dramatic DS9-related episode has ship's doctor Beverly Crusher fall in love with a visitor only to find that the form of the object of her affection is a meat suit for an older symbiote known as a Trill that requires a compatible host to survive. The Trekky good dilemmas in this one include Crusher having to determine if she loves the meat suit or the small creature that inhabits it and whether she can love a substitute host.

All of this amounts to a good (if not exceptional) season with numerous episodes that achieve the dual "Trek" objectives of making you think while you ponder the prospect of a future that is much brighter than our present suggests that we will enjoy. It will also make you feel that we can all live long and prosper.

Anyone with any questions or comments regarding "Trek" is strongly encouraged to email me; you can also connect on Twitter via @tvdvdguy.