'A Cry From Within' DVD: Horror Is Child's Play for Unsuspecting New Homeowners 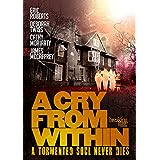 The March 17, 2015 Breaking Glass Pictures DVD release of the understated 2014 horror film "A Cry From Within" is an apt choice for a snowy or rainy evening of viewing pleasure.

Casting Eric Roberts, whose 379 IMDb acting credits may be a record for that site, as loving dad/husband Jonathan greatly contributes to the awesome '80s vibe of the film. A scary because its true element relates to director/co-star Deborah Twiss reporting that the story relates to a supernatural incident from her past. Having the film reflect the Hitchcock method of setting the terror in an everyday setting creates a trifecta regarding the modern classic horror film sense of "Cry."

The following clip, courtesy of YouTube, of the theatrical trailer for "Cry" offers a nice glimpse of the suspense and psychological drama in the film while avoiding spoilers.


The simple tried but true horror premise is that Jonathan and his career gal wife Cecile pack up the kids and leave New York City to move to a small Amityville of  "Horror" fame style Long Island town in the wake of a tragedy. In a simple twist of Hollywood-style fate, they stumble onto what seems to be the perfect new home.

Invalid Sophia owning the ordinary-looking abode and sharing it with her highly resentful never married adult daughter/caretaker Alice (played by Cathy Moriarity) introduces aspects of "Psycho," "Grey Gardens," and "Whatever Happened to Baby Jane." One spoiler is that the cringe-worthy scenes of Alice feeding the bed-ridden Sophia does not involve any rodents.

The nicely paced film builds the suspense as the new inhabitants experience increasingly creepy incidents that start with things such as closet doors not staying close and the family guinea pig escaping from his closed carrier. This escalates to hair-raising horror as the malevolent entity behind the eerie goings-on becomes an increasingly strong force that is feeding on the trauma of the new family.

The building of this tension coincides with both Alice becoming increasingly psychotic in her new home and the audience learning more about the reasons for her current state.

The predictable (but still entertaining) climax comes in the form of the resident unfriendly ghost going on an arguably understandable rampage. One spoiler regarding this segment is that no guinea pigs are harmed in the making of this movie.

The aforementioned "ripped from the headlines" aspect of the film and the deeper than typical psychological aspect of "Cry" distinguish it from both the current grindhouse horror titles and the less substantial suspense fare from the era in which Roberts was a matinee idol.

The special features include deleted scenes and cast interviews.

Anyone with questions or comments regarding "Cry" is welcome to email; you can also connect on Twitter via @tvdvdguy.