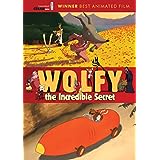 The recent Random Media DVD release of the 2013 English-language version of "Wolfy, the Incredible Secret" (nee LouLou, 'l'incroyable secret) is the rare children's movie that adults will love on the first two viewings, enjoy the next three, and tolerate the following twenty.

Accolades for this hilarious and well-drawn animated film include receiving the award for Best Animated Film at the 2014 Cesar Awards. The American theatrical run of "Wolfy" began at the recent New York International Children's Film Festival.

The following clip, courtesy of YouTube, of the trailer for "Wolfy" terrifically showcases the artful animation, fun humor, and intrigue of the film.


The titular canine is a highly civilized and soft-spoken member of a forest community in which members of that generally predatory species peacefully co-exist with the local rabbit population. In fact, Tom the rabbit shares a lifelong "The Fox and the Hound" style friendship with our hero.

This very cute and equally entertaining romp is based on the "LouLou" series of French children's books.

The events that lead to a testing of that friendship begins with an encounter in which Wolfy receives news of his long-estranged mother. This segment includes a hilarious bit of slapstick involving Tom.

Our friends then hop in a spiffy red roadster to drive to Wolfy's homeland of Wolfenberg in search of the aforementioned maternal figure. Getting lodging in the face of prejudice related to Wolfy being a nudist and Tom being a "no fang" turns out to be the least of their problems.

Tom faces further problems regarding his arrival coinciding with a gathering of predators of several species for an event that is a genuine blood sport. Whether this character avoids getting a hare out of place drives a significant portion of the action.

Meanwhile, Wolfy takes his rightful place among Wolfenberg society only to be caught up in palace intrigue that kids will largely follow and that adults will relish. One spoiler is that the plotters seem to fall just short of literally being wolves in sheep's clothing.

The drama, which is interlaced with plenty of terrific toddler-friendly humor, culminates in an well-crafted showdown in which family secrets are revealed and harmony is restored. It is equally nice that everyone ends up where he or she arguably belongs.

This tale further follows the tradition of awesome European animation that keeps things kid-friendly without dumbing it down, being strident,  or pushing an agenda. It simply entertains.

Anyone with questions regarding "Wolfy" is welcome to email me; you can also connect on Twitter via @tvdvdguy.