'Mondovino' CS: We Will Review No Doc.on Wine Industry Before Its Time 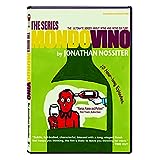 The Icarus Films 4-disc 10-episode DVD release, which hits virtual and actual store shelves on March 17 2015 (a.k.a. St. Patrick's Day), of "Mondovino" provides an awesomely extensive and entertaining look at every aspect of the wine industry. It also provides a terrific follow up to the December 2013 Unreal TV reviews on the BBC "Big Wine" Adventures series starring James May and Oz Clarke.

The follow clip, courtesy of YouTube, of the trailer for "Mondovino" expertly conveys all that is wonderful about this documentary. These scenes provide a sense of the sharing of knowledge by top winemakers and the related humor.


This time, charming documentary filmmaker Jonathan Nossiter lets the subjects tell their own stories in this production that Icarus aptly describes as a "multi-generation, globe-trotting saga" that  Icarus notes "covers not only the entire gamut of wine making, but wine's place in a treacherously globalized and hyper-marketed world."

By literally turning the camera on his subjects (who represent the full range of views) and limiting the presentations to their statements, Nossiter truly provides unbiased looks at his topics. He additionally achieves the related documentary standard of entertaining and informing the audience.

The three episodes on which this review is based indicates that Nossiter especially focuses on the globalization and marketing aspects of the industry. The pilot is a feature-film quality telling of the uproar in a small community in the South of France in the wake of Napa Valley wine giant Mondavi entering a deal with the then-mayor to cultivate a large portion of the forest outside town.

Nossiter expertly conveys the strong feelings on both sides of the issue and the greater political forces related to the controversy. This is akin to the uproar regarding the efforts of Disney to build a theme park near the Manassas, Virginia Civil War battlefield in the '90s.

The great humor includes a local policeman who myopically focuses on the parking issues in the community. One can easily picture this civil servant organizing the deck chairs on The Titanic as that ships sinks.

Nossiter remains in France for the second episode and focuses on a family of wine-makers, including a daughter who arguably is sleeping with the enemy regarding working for the competing vineyard of the family of her then-husband. The family dynamics also involve issues related to a typical sibling rivalry.

These episodes nicely set the stage for the Napa-set third episode, which involves interviews with members of the aforementioned Mondavis and their own family issues. The audience also gets nice tours of the other two Napa vineyards that make up the "Big Three" in the region; this includes a discussion of what justifies selling a bottle of wine for $2,500 or more. As an aside, your (sometimes humble) reviewer, who refers to the products of Pacific Northwest U.S. micro-vineyards as hippie hot tub wine, is always content with "Three Buck Chuck."

The California segment additionally indicates the universal nature of labor matters in the wine (and general agricultural) industry. Unions and general working conditions are issues on both sides of the pond. One nice segment on this subject in the Napa episode has one vineyard owner tell Nossiter that wine is not part of the Mexican culture only to have Nossiter respond that Americans only started drinking wine 30 years ago.

This wonderful blending of universal elements results in a series that wine-lovers will adore but that will also appeal to anyone who can relate to family issues, the globalization of business and labor issues, or who simply enjoys watching well-filmed footage of beautiful areas.

Anyone with questions or comments regarding "Mondovino" is strongly encouraged to email me; you can also connect on Twitter via @tvdvdguy.