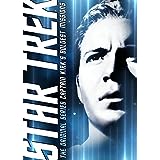 This "Breaking News" entry in the Unreal TV "Year of Trek" series interrupts coverage of Blu-ray releases of "Star Trek: The Next Generation" to share thoughts on the March 17 2015 (a.k.a. St. Patrick's Day) CBS Home Entertainment DVD release "Captain Kirk's Bold Missions." This release of these re-mastered episodes nicely comes a  few weeks after the sad passing of Leonard Nimoy (a.k.a. Spock Prime).

Thoughts of Ninoy living long and prospering and of constantly putting the needs of the many ahead of those of the few provides some solace regarding the loss of this "unreal" TV icon. Vulcans may not express sorrow, but humans sure do,

Each episode in "Boldest" shows Captain James Tiberius (not Thomas) Kirk, memorably portrayed by William "Get a Life" Shatner, at his boldest (no pun intended), posturing, and swaggeryist best. Of course, there is no doubt that Trekkers will debate the choice of episodes for years and that virtually none among this group will agree that the selected episodes comprise the ideal collection.

Excluding "The Trouble With Tribbles" is understandable; not including any episode with "Trek" staples the Klingons is more questionable. One also would have hoped for the classic early second-season episode "The Changeling," which has Kirk engaging in Vulcan-level logic to save the day.

The set starts out with the early S1 episode "The Corbomite Maneuver," which pits Kirk and his stellar (of course, pun intended) Enterprise crew against an alien whose bite is far worse than his true bark. The title refers to a tactic that Kirk uses in his battle against the aforementioned Balok.

"Corbomite" highlights include an unnecessarily shirtless Shatner strutting down the halls of the Enterprise and a very '60s dude style crew member whose death would be certain if he traded his yellow shirt for a red one.

The chronology of "The Conscience of the King" is that it immediately follows "Corbomite" in the "Boldest" set and comes a few episodes behind that offering in original airdate order. This perfectly good episode with subtle and not so subtle shades of Shakespeare arguably is the weakest of the lot. The primary plot revolves around whether the head of a traveling troupe of actors is the same man who is responsible for a widespread massacre 20 years earlier.

"Balance of Terror"  comes next on "Boldest" and a few episodes after "King" in the "Trek" timeline. This notable one introduces the Romulans, who look like the bad guys in a cheesy '50s scifi kiddie matinee serial in this incarnation, to "Trek" lore. The challenges that these warriors present Kirk this time includes resisting provocation that is designed to renew warfare between those folks and the Federation that Kirk and his crew serves.

Including fellow S1 episode "Space Seed" in "Boldest" is both a no-brainer and provides an opportunity to correct an omission in a "Year of Trek" review. This one has Kirk and his crew revive cryogenically frozen 1990s meta-human Khan and his crew only to face the threat of the latter take over the Enterprise. The Unreal TV review of the S4 BD release of "Star Trek: Enterprise" refers to a related episode involving this genetic engineering effort. However, those musings neglect to mention the connection between that episode and "Seed." The response of this site to folks whom this omission angers is "actually, mother was a political aide."

Fellow classic Trekisode "The City on the Edge of Tomorrow" has the trifecta of a notable guest in the form of future "Dynasty" star Joan "She's a bitch; everyone says so (Charlotte Rae)" Collins, the fan favorite element of time travel, and a dilemma that requires intense soul searching by a "Trek" captain. Said angst-inducing challenge this time requires that Spock convince Kirk of the importance of the aforementioned principle of putting the needs of the many ahead of those of the few.

A special feature has Collins and Shatner recording an (inadvertently skipped) introduction to "City."

Unreal TV does a better job regarding covering the "Enterprise" S4 episode that pays homage to the "Boldest" "Trek" S2 episode "Mirror, Mirror." This wonderfully campy parallel universe/goateed evil twin offering has Kirk and a few other principals finding themselves on an alternate universe Enterprise that follows brutal Klingon, rather than peaceful Federation, principles.

"Mirror" also includes one of the best ever variations of ship's doctor Leonard "Bones" McCoy's oft-stated decree that damnit he's a doctor, not an X in response to being asked to act outside his official duties. His statement this time that he is not an engineer awesomely has ship's engineer Montgomery "Scotty" Scott reply "you're an engineer now."

"The Doomsday Machine" comes right after "Mirror" on "Boldest" and two episodes after it in "Trek" chronology. This scifi take on "Moby Dick" has Kirk heroically putting the needs of the many ahead of those of the few in the face of the titular gigantic wood chipper style planet (and starship) consuming device.

Spock earns the award for memorable line in "Doomsday;" this highly stoic individual states on having a higher-ranking officer accusing him of bluffing that "Vulcans never bluff." This scene evokes a nice memory of "Star Trek: Voyager" Vulcan Tuvok declaring "Vulcans don't dance" in response to an effort to goad him into loosening up.

Fellow S2 episode "Return to Tomorrow" aptly rounds out the set if only because it features future "Star Trek: The Next Generation" star Diana "Dr. Pulaski" Muldaur as a kinder and gentler member of the Enterprise crew. The cerebral theme this time relates to the concept that humans are the descendants of a highly advanced society; the campy goodness relates to Kirk, Spock, and Muldaur's character voluntarily lending their meat suits to the consciousness of survivors of the aforementioned highly evolved beings.

The neglect regarding this review relates to a flu-like disease so heinous that it must be a Romulan virus that is maliciously inflicted on Earth preventing watching the special features in "Boldest" in time for this review. These documentaries, which the track records for such extras strongly indicates are awesome, are short films on "What Makes A Good Captain" and on the importance of Kirk to the "Trek" universe. ("Enterprise's" Captain Jonathan "Admiral Johnny" Archer remains a personal favorite.)

Anyone with any questions or comments regarding "Boldest" or other "Trek" stuff is strongly encouraged to email me. You can also connect on Twitter via @tvdvdguy.