'Traitors' DVD: Drugs and Rock and Roll (But No Sex) 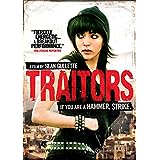 The recent Film Movement DVD release of the Moroccan drama "Traitors" further validates both the Movement slogan "bring home your next favorite film" and the "unreal" love of this site for that company. The aforementioned affection is especially strong regarding the uber-awesome independent film of the month club that Movement operates.

The following clip, courtesy of YouTube, of a scene from "Traitors" nicely conveys the brutality that makes it powerful.

It is clear from the opening moments of "Traitors" that it has the same terrific vibe as gritty classic American New Wave films. Two of almost countless examples of the latter are "Midnight Express" and "Warriors."

The aforementioned opening sequence depicts Tangier native Malika, who fronts the titular girl-power punk rock band, rocking out on the catchy and subversive tune "I'm Bored With Morocco." This ditty largely focuses on the social inequality in the titular nation.

Malika soon connecting with a music producer who is in her corner but requires that the band pay for recording a demo. partially sets the action in motion. Early developments have Malika conning a poor sap who is looking to buy a date only to have the not-so-friendly neighborhood drug dealer with whom Malika is acquainted come to the rescue.

The need for money to advance her career and a concurrent family financial crisis prompt Malika to agree to a one-time gig as a drug mule. The toll regarding the ensuing harsh reality is a large part of the gritty goodness of this film.

Although Malika finding herself at odds with her new temporary employer is predictable, the nature of that conflict is not; the same holds true regarding the ensuing events. Suffice it to say, our heroine (no pun intended) learns to not underestimate those whom she has scorned.

At the same time, writer/director Sean Gullette keeps things overall realistic with the glaring exception of the police who are conducting road blocks seeming to unduly discount suspicious behavior. Other than that, you feel the desperation and overall sense of dystopia that leads to Malika going for the quick buck in pursuit of her dreams.

The Bonus Short film that Movement always includes in these releases is the most apt one ever. It is a 30-minute version of "Traitors" and shares the name of that feature-length film. This version largely consists of the aforementioned opening scenes but throws in new footage that contributes good exposition to both this special feature and the longer film. Pure speculation is that this condensed version is a demo. regarding which Gullette hopefully did not have to transport a coupe full of illegal drugs to finance.

Anyone with questions or comments regarding "Traitors" is strongly encouraged to email me. You can also connect on Twitter via @tvdvdguy.