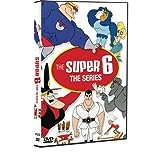 This review offers thoughts on the wonderfully nostalgic 1966-67 Saturday morning animated series "The Super 6." This set contains all 20 half-hour episodes of this program.

The fact that "Super" was the follow up by the DePatie-Freleng studio to its eternal classic "Pink Panther" shorts, which are also available on DVD in a complete collection set, provided it excellent potential. "Super" also had the benefit of being an example of the popular super hero parody genre, which included the uber-awesome "Underdog" (which also has a complete series DVD set) of the era.

"Super" borrows nicely from "Underdog" in the appearance of some villains and more directly in one short starring filler characters the Matzoriley Brothers (more on them later) in a cartoon that is very reminiscent of the "Klondike Kat" filler cartoons from "Underdog."

"Super" additionally includes the same terrific social satire and terrifically bad puns as "The Adventures of Rocky and Bullwinkle" from the same era. This homage extends to "Super" having some "Rocky" style narration in some cartoons.

"Super's" wonderfully '60s style pop tune theme song and action-packed opening credits greatly add to the fun. The theme's lyrics and tune are guaranteed to stick in your head on the first hearing.

The following clip, courtesy of YouTube, of these credits conveys both this awesomeness and introduces this non-sinister six.

The highly amusing premise of "Super" is that the titular sextet of comically not-so-bright ubermenschs work for the Super Service detective agency. A typical episode begins with most members of this group and their colleagues sitting around the waiting room of their employer until a client calls in with a job that the dispatcher known as Chief assigns to one of them.

Super Bwoing is the featured character; his status as an intern makes him the Rodney Dangerfield of the group, and his x-ray vision and ability to pilot a a flying guitar augment his super strength. Character actor Charles Smith endows this character with a strong Jimmy Stewart tone.

Fellow character actor Paul Stewart Elevator Man has a belt with up and down buttons that allow him to alternate his size anywhere between the dimensions of an ant to skyscraper height. His first outing "Down Please" is one of the best cartoons in this terrific set.

Magneto Man uses his ability to attract metal to foil the bad guys; Super Scuba, voiced by truly legendary comedian Arte Johnson, is the underseas-oriented Aquaman type of the group; Granite Man is made out of that stone and spends his time as a park statue until a magic spell brings him to life; Captain Whammo/Zammo is essentially a stereotypical very handsome and egotistical Superman type.

The aforementioned Matzoriley Brothers are the most bizarre characters of the group; they are three heads perch atop a single body. They are simply known as Numbers 1 through 3 and have distinct personalities.

One head is the tough and somewhat bullying leader of the group, another is a submissive coward, and the third is a horribly stereotypical Chinese man who regularly quotes the wise sayings of "Confusion."

The Matzoriley siblings inexplicably travel through time to complete a challenging task from a different era in each offering; these include capturing an Old West outlaw and rescuing a damsel in distress from a castle.

In addition to using the same concepts that make the other mentioned cartoons from the era special, "Super" shares the  charm and cleverness of those shows that keep kids of all ages entertained. Providing those of use who grew up watching these shows either in the '60s or '70s a chance to discover a new fun program from that era is a bonus.

Because your humble reviewer does not work for Super Service, anyone with questions or comments regarding "Super" must either email me or find me on Twitter via @tvdvdguy.