'In the Heat of the Night' S4 DVD: Carroll O'Connor's 'Matlock' 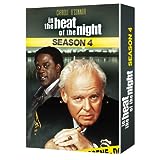 TGG Direct's DVD release of the fourth season of the eight-season 1988-1995 crime drama "In the Heat of the Night" is a nice reminder of the "kinder gentler" type of character-driven police show that used to populate the airwaves. Further, "Heat" star Carroll O'Connor using a southern accent in his role as the police chief of a small Mississippi town provides the entertainment of imagining Archie Bunker speaking with a drawl.

Candor requires divulging that clearance issues prevented including the season premiere "Brotherly Love" and the mid-season episode "Shine on Sparta Moon" in the fourth-season set. On a happier note, TGG released a DVD set of the fifth season of "Heat" on the same day as the fourth-season set; Unreal TV will review that set in early 2014.

"Heat" is based on both the novel and film of the same name about a big-city black detective practicing his trade in a small southern town with its fair share of racial tension. Howard E. Rollins, Jr. plays the transplanted MR. Chief of Detectives Virgil Tibbs in the series.

The sampled 7 of the 19 fourth-season episodes in this set indicate that racial tensions had died down by then; the perpetrators seem to be pretty evenly divided between black and white people, and race does not seem to be a factor in any offense or the interactions between the officers on the Sparta police force.

The first episode in the set has O'Connor's Chief Gillespie and his officers investigating the death of a part-time prostitute operating from a local truck stop. This one manages to include a "Papa don't preach" storyline into a well-told and straightforward tale of a wandering husband, an "angel is a centerfold" type working girl, and a blackmail scheme.

The following episode is an even better one; this tale revolves around circumstantial evidence supporting an elementary school student's assertion that his teacher sexually abused him. The themes in this one include yellow journalism and the overall harm associated with accusations of this nature.

"Just a Country Boy" from later in the season is arguably the most entertaining one in the group; it has officer "Bubba" Skinner going to Los Angeles to escort a suspect in an arson case back to Sparta, Mississippi. Skinner humorously running afoul of big-city types and teaming up (and bickering) with an employee of the company that insured the burned building provides expectations of a spinoff that never materializes.

The season finale has father-of-baby-twins Tibbs facing internal and external pressure to find a less dangerous line of work; his being placed in harm's way while investigating a double shooting at a roadhouse does not help the case for his continuing to fight for truth, justice, and the American way.

The end result of the investigation of this season of this series is that NBC savior Fred Silverman assembled a good cast and talented writers to breath new life into  a solid time-proven concept.

Anyone with questions or comments regarding "Heat" is welcome to email me. You can also find me on Twitter via @tvdvdguy.