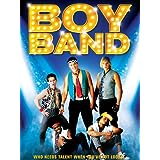 The wonderfully cheesy 2010 theatrical movie "BoyBand," has enough elements of a direct-to-DVD film to achieve the same cult status as "Attack of the Killer Tomatoes." This tale of high school quarterback Brad Roberts, played by former Power Ranger Michael Copon, sacrificing his BMOC status to front a boy band called "New Condition" is an obvious parody of the story of Finn Hudson, played by the late Cory Monteith, in the Fox show "Glee."

The following clip, courtesy of YouTube, of "Band's" provides a sense of this so bad its good quality.


This film being released on DVD a few weeks after former tween star Aaron Carter, who is the younger brother of Nick Carter of the boy band "The Backstreet Boys, declared bankruptcy is an interesting coincidence.

The first cheesy element, which harkens back to the former Fox show "Beverly Hills 90210," of "Band" has the late 20s Copon and other actors of that age play high school students. The usually uber-awesome Ryan Hansen of "Veronica Mars" and "Party Down" co-stars as a bandmate. They are joined by the diminutive Ryan Pinkston of the Fox failedcom "Quintuplets."

These three respectively play the tough but sensitive guy, the dreamy pretty boy, and the cute young thing. They do this as well as Bart Simpson and his friends in the "The Simpsons" episode "New Kids on the Bleech," which features a cameo by boy band N'Sync, in which that group of pre-teens forms Party Posse.

The next cheesy element is setting the film in 1982 and outfitting the main characters and most of the supporting cast in the hilariously absurd hairstyles and clothes of the era. The absence of Alan Thicke or any other '80s era TV or film star is one of the few disappointments in the film.

Watching Roberts' voluntarily downfall (which includes getting pelted by sloppy joes), seeing this group somehow form a musical family, and watching Roberts' rival from the football team all provide good humor; however, watching the boys perform truly steals the show and evokes thoughts of the hilarious off-Broadway show "Alter Boyz," which centers around a Christian boy band.

The "Band" group kicks off their career with a wonderfully silly song titled "Dream" accompanied by very funny choreography that includes pantomiming sleeping.

They move on to a wonderfully cheesy video, which includes a high-sprited shirtless pillow fight, of a song that has each boy introduce himself and discuss his astrological sign. Seeing Copon being ineptly sprayed by water while wearing only plastic briefs and an unbuttoned transparent rain coat is only one of many memorable moments from that scene.

The grande finale in every sense comes during a high school talent show at the end of that film; that number has the boys singing about things, which include talking and shopping, that girls like. Of course, these twinks with 'tude act out the lyrics.

The final review of "Band" is that everyone involved in it knows that it is far from a Merchant-Ivory production; they simply seem to be having a good time and want to provide a glimpse at the dark sides of "Glee" and "90210."

Anyone with questions regarding "Band" is welcome to email me; you can also find me on Twitter via @tvdvdguy.