'The Outer Limits' CS DVD: Fables from the Family Room and the Final Frontier 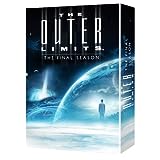 Along with the recently reviewed DVD release of the Showtime original series "dead like me" (and early seasons of "Stargate: SG-1"), the DVD release of the final season of the 2995-2002 seven-season Showtime series "The Outer Limits" demonstrates that that other leading premium cable network lacked a monopoly on high-quality cleverly quirky shows even in the late '90s and early 2000s.

"Limits" is a remake of the 1963-65 "The Twilight Zone" clone of the same name. Like "Zone," both "Limits" are anthology sci-fi series that often include a moral. They additionally share "Zone's" habit of using future, current, and faded stars to portray the characters.

The following clip, courtesy of YouTube, of the wonderfully creepy and trippy opening credits of the "Limits" remake indicates both how well it is produced and how close it keeps to the original series.

The 22 episodes from the seventh season of "Limits" are a prime example of the themes described above. Roseanne's former husband Tom Arnold stars as a business executive who defies his family's objections to buying a robot to assume some of his parental and household duties in the season premiere. The producers follow up Arnold's appearance with a young looking Jeremy Sisto of "Six Feet Under" and "Law and Order" in the season's second episode.

In true "Limits" (and "Zone,") style, things take a dark turn in Arnold's episode and his character learns the dangers related to sending a mechanical being to doing a parent's job.

The third episode of the seventh season is more akin to stories from the "Star Trek" universe in that it addresses dilemmas associated with traveling into the past to change the future. It also involves the classic "Trek" issue of whether the needs of the few can ever outweigh the needs of the many. The background regarding this dilemma relates to efforts to prevent a devastating plague.

The value of alien and newly-formed life are other "Trek" themes that this season of "Limits" addresses.

The penultimate episode of the season (and the series) truly is "the best of both worlds" in that it combines terrific elements of "Zone," "Trek," and even "Stargate." This one has "Star Trek: Voyager's" Robert Duncan McNeill literally matching wits with a very stoic android played by Zack Ward, who plays very unstoic roles in "A Christmas Story" and the Foxcom "Titus."

The action takes place on an alien planet that McNeill's character and his team is terraforming in anticipation of a select group of humans settling there after essentially disposing of earth. The snag is that the android engages in sabotage that is designed to prevent mankind from continuing to destroy planets.

In addition to the element of establishing footholds on alien worlds, the "Stargate" element comes into play by excellent use of flashbacks from prior "Limits" episodes to illustrate the destructive and vicious nature of man. The particularly surprising outcome in this adventure is another way in which it excels.

The series finale is also very good and is another "clip" show. This one revolves around a military officer competing for a coveted mission. This requires that he experience simulations so that his "superiors" can evaluate how he handles assorted challenges, which typically involve an alien threat. The payoff in this one is moderately surprising, but the story unfolds nicely and is well cast. Additionally, seeing a very poorly disguised "Stargate" set is great fun.

The moral of this review is that high production costs and other obstacles related to producing (mostly) high-quality scifi shows has made that genre all but extinct, and the DVD sets of the "Limits" are an excellent way to remember the good ole days in which that show and the others mentioned above still aired.

Anyone with questions or comments regarding "Limits" or any of the other scifi shows mentioned above is encouraged to email me. You can also find me on Twitter via @tvdvdguy.