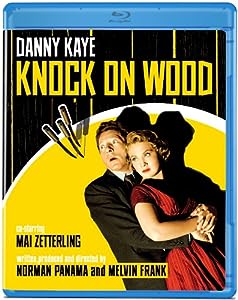 The Olive Films extraordinarily well-produced Blu-ray release of the Oscar-nominated 1954 Danny Kaye "Knock on Wood" shows that Danny Kaye, like the similarly featured Ralph Malph" of the '70s sitcom "Happy Days," still has it. This film stands the test of time as awesomely as Kaye's other masterpieces. This film is also a great homage to the 1946 thriller "Dead of Night."

Kaye fans and Unreal TV readers know by now that this release is part of the "Danny Kaye Centennial" celebrates the 100th anniversary of this indescribably talented and versatile performer who got the stellar career that he deserved. Despite appearance to the contrary, there are not 100 reviews in this series.

A particular good aspect of "Knock on Wood" is that it includes a scene that is very reminiscent of the uber-classic "chalice with the palace" scene in Kaye's 1955 film "The Court Jester." That film is one of the two selections in the "Danny Kaye Double Feature," which will wrap up this series of reviews of Kaye films this week.

Kaye's character in "Wood" is ventriloquist Jerry Morgan who, ala Chuck Campbell on the '70s sitcom "Soap," expresses his anxiety through his dummy. The difference in this case is that Morgan's outbursts are jeopardizing his career.

Consistent with the winning formula of numerous Kaye films, the neurotic Morgan soon finds himself the proverbial unwitting pawn in nefarious dealings. Having these events begin in Paris, move onto Switzerland, and finish up in London adds a nice element of international intrigue. Regular dramatic narration adds a nice touch of "Rocky and Bullwinkle."

Along the way, Kaye performs a few song and dance numbers, meets the woman that every Kaye fans knows will be our hero's gal at the end of the film, and leads pursuers on a chase that requires that Kaye undergo several rapid costume changes.

A routine that Kaye performs as Morgan's father is one of the best numbers in the film; his femme essentiale is Mai Zetterling as the hubba hubba and level-headed psychiatrist who is treating him, and the climatic chase helps bring things to a very entertaining and satisfying end.

Great moments include said shrinker de tetes realizing that she will be caring for Morgan the rest of her life and scenes involving a sporty little car that seems more complicated to operate than a space shuttle. You also do not want to miss a scene in which Kaye gets trapped under a top villain's desk.

The following clip, courtesy of YouTube, of one scene involving said automobile provides a good sense of "Wood's" humor. The subtitles, which seem to be in Hebrew or another language from the Middle East, indicate the widespread appeal of Kaye's films.


Writing more about the specifics of the film would spoil the amusing surprises galore that are typical of a Kaye film. Suffice it to say, everyone from eight minutes to eight hundred years who has a sense of humor will love it. It is wonderful that Kaye still has it and even better than we can now get it.

Anyone with questions or comments regarding Kaye or "Wood" is welcome to email me. You can also find me on Twitter via @tvdvdguy.