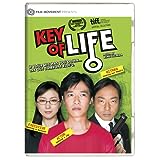 The subtitled hilarious 2012 Japanese romantic dramedy "The Key of Life" is a great example of the terrifically broad scope of  the monthly always independent and usually foreign selections of the film-of-the-month club that Film Movement operates. Members and folks who buy this title separately can start enjoying it on January 7, 2014.

The cleverness of this title regarding the central event related to largely failed and suicidal actor Sakurai switching lives with that of Kondo after the latter becomes disoriented in a freak accident is only part of what makes this film so awesome. The ensuing best identity switch since "Trading Places" has far more twists and provides scads more laughs than the entire collection of Katherine Heigel and Julia Roberts films combined.

The following clip, courtesy of YouTube, of "Key's" spoiler-laden trailer shows the incredible feats that writer-director Kenji Uchida pulls off. It is remarkable enough when anyone who takes on two jobs in a film pulls both off with tremendous skill.

Uchida doing one better by making a film set in a very foreign culture both relatable and highly entertaining to an American audience that suffers through scores of badly done romcoms each year. Sitting down with him over a glass of sake would be a dream come true.
The woman who adds the rom to the dramedy is Kanae. She is a successful magazine editor who has decided to schedule her wedding before finding someone whom she wishes to wed. A chance meeting with Kondo, who has assumed Sakurai's identity and life, has this pair on a surprisingly smooth road to marriage. The same ensuing hilarity and drama that prompted Film Movement to add this film to titles such as the previously reviewed uber-awesome British movie "Broken" and earlier reviewed French film "Aliyah" make "Key" truly must-see.

Particularly good segments involve Sakurai trying to bluff his way through situations related to passing himself off as the significantly older Kondo under very harrowing circumstances and Kondo trying to make sense of living a life that does not seem to fit him. The inevitable pairing up of these characters roughly halfway through the film provides additional fodder for hilarity and mayhem.

For her part, Kanae's relationship with both her sister and father are particularly relevant to any American with a sibling and/or a parent; a scene that involves a DVD mixup in her storyline also helps make her tale memorable by providing one of the biggest laughs in the film.

Film Movement additionally does its great job of adding value to the set by including its regularly (but hardly standard) bonus short. This one, which is very aptly titled "Finale," is full of twists and moderate surrealism. It further proves the adage that it ain't over until the fat lady sings.

The international accord regarding this perfect blend of talents is that it will appeal to anyone with a yen for a story that will both make you laugh and feel deep compassion for two-dimensional characters.

Anyone with questions or comments regarding "Key" is welcome to email me; you can also find me on Twitter via @tvdvdguy.