'Bat Masterson: The Series' DVD: Fastest Cane in the West 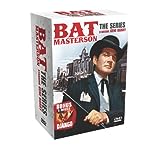 
One of numerous elements that sets "Bat" apart from the gaggle of other Westerns that aired during its era is that portrays the (sort of) true stories of the titular William Barclay "Bat" Masterson, who earned his nickname by speaking softly and carrying a big stick that was as lethal as a gun in his hands. On a similar note, this show easily could have been titled "Have Cane, Will Travel."

The real and fictional Mastersons were a combination marshal and gambler. They also were snappy dressers who preferred derbies over Stetsons and well-tailored suits in lieu of rougher garb.


Gene Barry, who is also known for playing the titular character in the "Hart to Hartesque" '60s crime drama "Burke's Law" stars as Masterson in the series. His Masterson is very cool under pressure, seems to have a lady in every frontier town, and is kind to small children and animals.

Barry does not go so far as to appear as himself after each episode to invite viewers who want to learn more about Masterson to check out a 1957 biography of that man by Richard O'Connor from the library. However, the first season closing credits do appear over a cover of that tome.

The following clip, courtesy of YouTube, does a great job conveying the fun spirit of "Bat." It also provides the bonus of including the memorable theme song from the series.


Another terrific aspect of "Bat" is its similarities to the equally classic "Maverick" from the same era. Aside from both Western series featuring tall dark strangers, Masterson and les freres Maverick are professional gamblers who often find themselves squaring off against a bad guy or group of bad guys, who are equally often employed by an evil rich guy.  Additionally, all of these men keep violence to a minimum. The Mavericks achieve this by using their wits and charm as artfully as Masterson yields his cane.

Additionally, the very catchy Western-themed themes of "Bat" and "Maverick" have lyrics that establish each show's premise as well as "The Ballad of Gilligan's Island" relays the tale of the "seven stranded castaways" in that series.

One difference between "Bat" and "Maverick" is that Masterson either rides into town looking for that particular trouble or happily rises to the challenges that it presents; Bret and/or Bart Maverick typically have simply come to play poker and find themselves coerced into being a hero.

"Bat's" pilot gets things off to a great start by beginning with the typical narration that provides the background of that week's adventure. In this case, Masterson's mission is to help a saloon keeper who a rival is using an especially nasty method to run out of business. This conflict leads to Masterson facing said rival in a showdown that demonstrates that resolving disputes does not require using guns.

Barry offers another great surprise at the end of this episode in a scene that offers an amusing take on a alternate ending. That bonus makes a very good inaugural outing truly special.

Barry and the writers kept things going well for another three years until wrapping things up with two episodes that show how the tone of the series had loosened up some.

The penultimate episode has Masterson and equally real-life Western hero Wyatt Earp teaming up to recover a small fortune that outlaws stole from Earp. Earp and Masterson engage in good-natured bantering, Masterson shows his rascally side quite a bit, and Earp even plays an amusing joke on his friend at the end of this one.

The series finale is more serious than the Earp one and has a nice tie back to the pilot; it also provides interesting insights into forming our postal system and the tremendous value associated with being appointed as a postmaster.

The many rings of truth in this very appropriate end to a terrific series suggest that is closely based on an adventure of the real Masterson.

Anyone with questions regarding "Bat" or "Maverick" is welcome to email me; you can also find me on Twitter via @tvdvdguy.