'On The Double' DVD: Danny Kaye Version of 'Hogan's Heroes' 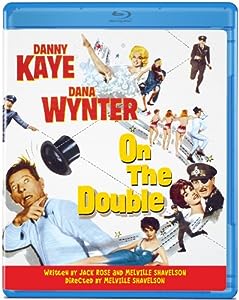 Olive Film's Blu-ray release of the 1961 Danny Kaye film "On the Double" is part of the year-long "Danny Kaye Centennial" event that celebrates the 100th anniversary of the birth of this unbelievably versatile performer. The previously reviewed DVD set "Danny Kaye: The Goldwyn Years" is part of this celebration.

Although the Blu-ray images of this film are less sharp than Blu-rays of modern films that are recorded in hi-def, the picture is very good. Further, the sound is far superior to that on DVDs.

"Double" provides Kaye a chance to show off his well-known talent for playing multiple roles, which he also displays in "Wonder Man" in the "Goldwyn" set, by having him play WWII American soldier PFC Ernie Williams and the high-ranking British officer whom Williams strongly resembles.

The film opens with Williams, who is stationed in England, entertaining his fellow soldiers with hilarious impressions of Adolph Hitler and Winston Churchill. Williams moving on to playing the aforementioned commanding officer MacKenzie-Smith ultimately leads to British Intelligence coercing him into impersonating MacKenzie-Smith in an effort to thwart the Nazis.

This premise is very reminiscent of the very funny '60s sitcom "Hogan's Heroes" that has a resourceful band of WWII American POWs operate an extensive sabotage, espionage, and escaped POW underground railroad under the nose of the commandant of the stalag where the group is imprisoned.

In typical Kaye fashion, MacKenzie-Smith's personality differs greatly from that of Williams. Williams is a timid soft-spoken nebbish who likely has not even looked at photos of a naked woman, much less seen one in person; MacKenzie-Smith is a bullying, hard-drinking, adulterous blowhard.

The hilarious obstacles that Kaye must face while impersonating MacKenzie-Smith include fending off his amorous mistress, dodging Nazi assassination attempts, and dealing with MacKenzie-Smith's wife returning early from a war bond selling trip to Canada. Kaye's remark that she must have sold all the bonds is one of the film's best lines.

One "must-see" scene features veteran British film legend Margaret Rutherford as "Lady Vivian," who is MacKenzie-Smith's domineering elderly aunt. The party scene in which Vivian verbally pummels the truly hapless Kaye is fall-on-the-floor funny. An aftermath scene between Kaye and Dana Wynter, who plays MacKenzie-Smith's wife, is a great wrap-up of the hi-jinks at the party.

Another great scene in which Nazis are trying to force Kaye to reveal allied plans initially provides a forum for Kaye's wonderfully fast-talking schtick and leads to a classic truly madcap chase in which Kaye changes into ridiculously obvious disguises even faster than than his fictional, but no less animated, Bugs Bunny or the similar Scooby-Doo and Shaggy. One can almost hear the bubble gum pop music in the background.

The final debriefing regarding "Double" is that it is a really fun film that shows that Kaye's schtick did not get old even after 15 years of largely playing the same type of role.

Anyone with questions or comments regarding "Double" or Kaye is encouraged to email me. You are also welcome to connect on Twitter via @tvdvdguy.