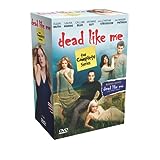 TGG Direct's recent DVD rerelease, which includes the 2009 direct-to-video film "Life After Death" of the 2003-04 two-season Showtime Original Series "dead like me" provides a good chance to get an affordable set of this series that demonstrates that "Dexter" was not that premium network's first awesomely darkly humorous offering.

As an aside, this release coincided with TGG's DVD release of the final season of the very good seven-season 1995-2002 Showtime remake of the uber-awesome '60s "Twilight Zone" clone "The Outer Limits." A review on that release will run within the next few days.

The "dead" premise is that the wonderfully cynical and deadpan late-teens Georgia "George" Lass is randomly selected to be a grim reaper on a toilet seat that falls from space striking her. Part of the humor relates to the accident occurring within a few hours of Georgia experiencing the first day of the rest of her life in a dead-end job at temp. agency.

One reason that this imaginative and humorous slant on a macabre origin story seems somewhat similar to the equally awesome 2007-09 dramedy "Pushing Daisies" about a pie maker who pays a price for extending the temporary period that he is allowed to bring a dead person back to life is that the terrifically creative Bryan Fuller created both shows.

Much of the wonderfully cynical tone of "dead" relates to the concept that life after death is even worse than the preceding version. George still must work a tediously soul-crushing job to pay "living" expenses and now must "daylight" as a collector of others' souls. She experiences additional angst witnessing how her death and other events affect her parents and younger sister but largely lacks any ability to help.

Stating more about "dead's" lore would destroy the fun of learning how grumpy regional head reaper Rube (played by Mandy Patinkin) administers the reaping system, discovering the quirks of the '30s starlet Daisy Adair and other dead inside and outside types with whom George works, and watching the entertainingly sadistic activity of the invisible creatures who often play a central role in people losing their lives.

The following clip, courtesy of YouTube, of the trailer for the first season of "dead" provides a little more sense of this amusingly twisted show without spoiling much.

The numerous "life and death" issues that the series tackles include the necessity of someone who has done nothing to deserve having his or her life end passing away at the time that the force that controls such things considers appropriate. This lesson includes the chaos that ensues when that force is defied.

One wonderful "sit" that make for great "com" is a desperate George learning while staying at the home of her unduly cheerful and otherwise obsessive temp. agency boss Delores Herbig exactly how deep Herbig's eccentric streak runs. Another "sit" has Rube taking over cooking in the waffle house where his team meets. This experience provides Rube a great lesson about Karma.

A more common "dead" theme is either a scheme or other nefarious activity of Mason, a British "rough," going wonderfully comically awry. Callum Blue, who also played "Zod" on "Samllville" and starred in the brilliant British series "Book Club," did a great job as Mason.

The reunion film, which catches up with the gang five years after the series experiences its own death, has Henry Ian Cusick of "Lost" playing the team's new boss; this character taking a much looser approach than Rube creates chaos and shows how George has evolved since her encounter with the toilet seat.

The final word regarding this tale of the best group of the walking dead ever to populate a television series is that producers simply do not make them like this Unreal show anymore. Pulling off sick humor so that it does not offend or get old is a tough trick that Fuller and his team do marvelously.

Anyone with questions about "death" or "Daisies" is welcome to email me; you can also find me on Twitter via @tvdvdguy.