'Smurfs 2' BD/DVD: Smurfastic Paris Scenery and Smurfy Fun for All 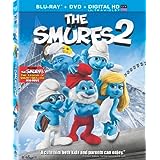 'The Smurfs 2,' which comes out on Blu-ray and DVD today, achieves the rare treat of both being a film that one can watch repeatedly and being a sequel that surpasses the original. It was initially watched for this review on Thanksgiving Eve, and a plan to show a Parisphile friend a sample of the smurftastic real-life scenery of the City of Lights two days later resulted in a smurfy time watching most of the film again.

Another great bonus is that the Blu-ray set of "Smurfs 2" includes a (presumably DVD version of) the really fun mini-movie "The Legend of Smurfy Hollow" that Unreal TV reviewed several weeks ago. Other extras include shorts on the naughties that "Smurfs 2" introduces and the interactive "Smurf-O-Vision 2 App."

The smurfs are small blue creatures who live a (mostly) very happy life in their village, and they first enjoyed wide-spread fame in an '80s Saturday morning cartoon. Aside from consisting of an all-male population with one exception and dressing almost identically in white pants and hats, the smurfs are known for having names that reflect their personalities.

Much of the conflict revolves around evil wizard Gargamel attempting to capture the smurfs to extract their essence as a means to enhance his magic. His wonderfully evil cat Azrael joins the hunt and often is responsible for the failures to ensnare our heroes.

The habit of the elfin stars to use the word "smurf" or a variation of it as a noun, adverb, or adjective adds to the fun. A rare "blue" moments in "Smurfs 2" consists of one of these creatures saying "you have to be smurfing kidding me." Papa likely smurfed his mouth out with smurf off-screen for that one.

The 2011 feature film "The Smurfs" greatly revived public interest in this blue man group. It was a mix of animation and live action and had many of the main characters, ala the uber-awesome Disney film "Enchanted," transported via a magic vortex to New York City. Their objective was to smurf their way home.

"Smurfs 2" has a group of these smurfy characters once again travel to New York; this time, they must rescue Smurfette, who is the aforementioned girl in the group, from Gargamel. This early part of the film provides Smurfette's origin story and why Gargamel wants to capture her.

A great scene from this portion of the film depicts a child's birthday party in which the host is neurotic about the offerings covering every food issues associated with the 21st century; these include complete absences of peanuts and gluten.

Tracking Gargamel soon has our intrepid explorers and their human allies traveling to Paris to save Smurfette and then return home. As alluded to before, Sony's 4K technology makes the Paris scenery beyond spectacular. Seeing it made the Parisphile want to hop the next plane to Orly and also inspired him to pre-order the Blu-ray of "Smurfs 2" on the spot.

Much of the action occurs in and around the Paris opera house; we are also treated to scenes on the grounds of the Louvre art museum, views of the Eiffel Tower and the version of the Statue of Liberty that the French kept for themselves, and numerous great scenes on the streets and in the air above Paris.

"Smurfs 2" also introduces the Gargamel-created Frankensmurfs known as the naughties, which are gray and evil versions of the main characters. Christina Ricci (who will always be Wednesday Addams to many of us) provides the voice of  naughty Vexy; J.B. Smoove of "Curb Your Enthusiasm" plays Vexy's brother Hackus. Smoove particularly has great fun playing this little wonderfully gonzo psycho.

The following clip, courtesy of YouTube, of the film's trailer provides a great sense of the film without containing any spoilers. It also provides at least one alternative scene.

While in New York in the first film, the smurfs befriend the stereotypically "nice young couple" Patrick and Grace Winslow, played by Neil Patrick Harris and Jayma Mays. Patrick and Grace return with their smurftastically named young son Blue for more fun in "Smurfs 2."

Mays does a good job as Grace, but Harris' current persona as a gleefully deviant "hound" on "How I Met Your Mother" and a host with an edge on awards show really do not jibe with his otherwise decent performance as Patrick. This former "Doogie" simply shows little emotion or genuine affection.

Having Harris in that role is akin to a decision to cast the current incarnations of Miley Cyrus and Justin Bieber as the wholesome Nelson offspring in a true-to-form remake of "The Adventures of Ozzie and Harriet." John Krasinski formerly of "The Office" immediately comes to mind as a better candidate for Patrick.

Post-toddler Jacob Tremblay does a wonderful job as Blue; he clearly has a great time and seems to accept the little blue guys as real. One can only hope that Tremblay does not fall victim to the child actor curse that has ruined many a good man (and woman.)

"The Simpsons" star Hank Azaria returns to once again play Gargamel and does a great but not memorable job. His CGI Azrael, listed as being played by Mr. Krinkle, steals their scenes. Azrael's annoyance at Gargamel's stupidity and a scene in which this fabulous feline tells his "master" "so long, Sucker" are fall-on-the-floor funny.

The most smurfy bit of casting is having the voice of Papa Smurf being the final role of the late and beyond uber-awesome Jonathan Winters. Anyone with even passing familiarity with Winters' work will not be surprised to know that he gets the voice perfect. R.I.P. Mearth and sooooo many other great characters.

Katy Perry does a great job providing the voice of Smurfette; other voice actors include Anton Yelchin and Alan Cummings.

The best way to smurf up this smurf of "Smurfs 2" is to express that the cinematography and the overall film exceed all expectations; one comes anticipating "Ice Age" and leaves feeling as if he or she has seen a quasi-classic Disney film.

Anyone with questions or comments regarding "Smurfs 2" is welcome to email me; you can also reach me on Twitter via @tvdvdguy.