The Purge: Candyland; A Dystopian View of Trick-or-Treating 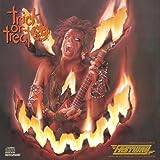 This Halloween-themed venture into Blogland is being taken with tongue roughly 75-percent in cheek. The theme that modern-day trick-or-treating is a mild fascism is in line with posts on our dystopian society and points out the coercive nature of this child-friendly extortion. The very term states that not handing over a sweet justifies defacing your property with an egg or leaving a flaming bag of dog poop on your porch.

The days of children merely walking around their own neighborhoods and knocking on the doors of folks they know are long gone. Many people do not know the boy next door, and that youngster and his posse now have parents drive them to "rich" neighborhoods sometimes 15 miles away to get better loot.

Om top of that, easily every third child alleges to have a sick sibling at home for whom he or she requests candy. A more despicable practice involves parents dragging infants (who are dressed up like lapdogs in costumes) as young as one month old into the cold dark night to get candy for said newborn. Any fool knows that that kid ain't getting that candy.

These circumstances simply do not justify spending $100 or more on 1,000 pieces of candy for these strangers. I have already spent $50 (despite shopping sales, using coupons, and enjoying loyal program discounts) on roughly 300 pieces of candy in the event that trick-or-trreaters are unavoidable. Many of us would rather spend that not insignificant amount of money for the pleasure of strangers on something else. As an aside, calling a tiny piece of chocolate "fun size" is a travesty.

Elements of the "The Purge" film franchise in which the government allows anarchy (no pun intended) to exist for one night a year in exchange for a crime-free existence at all other times come into play regarding those of us who do not wish to participate in pumpkin games for the reasons described above. We either must abandon our homes or cower inside to varying degrees to avoid a horde of children trespassing on our property and demanding candy "or else." On top of this, children walking down the middle of the road and recklessly dashing across the street during trick-or-treat hours makes driving in that period ill advised.

Personal experience during the two decades in which trick-or-treating has become a mob scene begins with initially enjoying the sanctity of a secure primarily adults-only building. On moving away, a friend having an October 31 birthday involved going to the home of her sister to VOLUNTARILY help hand out candy and having a nice dinner.

The demise of the aforementioned friendship led to several years of closing the blinds and sitting in virtual darkness while the hordes roamed the streets. My partner and I returning home from dinner during trick-or-treating last year required sneaking in the back door and stumbling up the stairs in the dark.

This "holiday" is particularly bothersome this year. A neighbor who has lived in her home for more than 20 years stated that the sheer volume of trick-or-treaters and the fact that virtually all those kids come from outside the area has motivated her to leave every light in her house burning and then abandon her home every year.

My partner and I have already debated our plan of action; the course of keeping the porch lights out (and thus running the risk of being egged or having toilet paper strewn in the trees) and drawing the shades but leaving the inside lights on is a bone of contention. It is also hoped that having the mother of said significant other over for lasagna can be enjoyed.

Remembering that this commentary is mostly made with tongue in cheek, one should remember that all of us have the right to quiet use and enjoyment of out homes. This includes the right (rather than the privilege) of not having unwelcome intrusions into this domicile.

A VERY SERIOUS suggestion regarding all this is a mash-up between a Tony Orlando and Dawn song and a reverse Passover. It is recommended that the United States establish a system in which folks who wish to participate in trick-or-treating tie an orange ribbon to their homes and that (as observed by Jessica in the hilarious sitcom "Fresh Off the Boat") the kids who want to wear disguises to had their shame regarding begging for candy limit their blackmail to those homes.

Anyone with CIVIL comments regarding this post is welcome to email me or to connect on Twitter via @tvdvdguy,