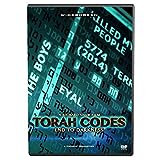 The 2015 documentary "Torah Codes End to Darkness," which is recently out on DVD, offers proof that the titular cipher in the roughly 3,3300 year-old titular first five books of the Bible describes 21st century events. The underlying premises that writer/director/host Richard Shaw presents is that Torah author God lives outside the progression of time in which we non-deities exist.

Shaw explains the history and the evolution of the code; he also interviews the plethora of Biblical scholars who currently utilize it. A highly amusing scene regarding this aspect of the film has one such scholar discussing an '80s-era computer lacking adequate capacity to upload the entire text of the Torah.

The basic idea of the code is that that the text of the Torah contains highly relevant words in close proximity to each other. A purely hypothetical example is finding the words "leader," "wealthy," and "arrogant" near each other after the fact if Trump wins the 2016 presidential election. The actual examples that Shaw provides include the September 11 attacks, and the the kidnapping of three teenage boys.

Shaw further shows that the code includes the reason for the world not ending in 2012 as predicted and additionally discussing the existence of aliens. A more individualized segment shows the results of a search of the name of a military officer who participates in the film into the code.

Shaw providing proof of the astronomical odds of the relevant words appearing in close proximity to each other as they do in the Torah in more secular texts addresses the "monkeys at a keyboard" argument regarding the code being random.

The primary appeal of "Codes" is the strong vibe of the '70s-style paranormal docudrama "In Search of" that it projects. The primary example of this is the movie including a mid-key sensational tone re: announcing upcoming topics. This is especially true regarding an announcement of an upcoming scene of a vanishing wheat field. The first spoiler regarding this is that a very logical and common reason exists for the field becoming sans wheat; the second spoiler is that the exposition regarding this is unduly long.

Like "Search," the underlying issue in "Codes" is the extent to which the viewer has faith regarding the presented facts. There is no reason to not believe that the aforementioned words do not exist as asserted. The question relates to the extent to which this is relevant in the same manner as whether an unexpected downpour on your wedding day is an omen or merely an unusual weather pattern.

Anyone with questions or comments regarding "Codes" is welcome to either email me or to connect on Twitter via @tvdvdguy.