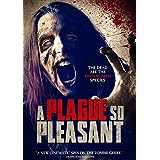 The recently unleashed Wild Eye Releasing DVD of the 2013 zombie flick "A Plague So Pleasant" oddly evokes thoughts of "Tom and Jerry" (or "Itchy and Scratchy") cartoons. Both "Tom" and "Plague" show the possibility of interesting variations on themes that are roughly 80 years old and do so in a very modern manner while remaining true to the relevant roots.

The primary twist in "Plague" is that the federal government grants zombies protected status that includes making rekilling them a crime. The limited control measures include having them "live" in a big field behind a fence that is more designed to keep the still-living out rather than to prevent the inhabitants from venturing beyond the confines of their home.

This, of course, is analogous to past and current treatment of other ethnic groups in the United States. It is unknown if a zombie cannot run for president, but it seems certain that they do not own casinos.

The following YouTube clip of the "Plague" trailer does not do it justice in that it makes it seem like a typical member of the genre to which it belongs. The movie is much more than extras in gore make-up running around.


One consequence of the aforementioned unlive and and do not let die again policy is that Mia Marshall is not moving on from the sort of death of her boyfriend Jerry. This particularly bothers Clay, who is the brother of Mia, when best bud Todd expresses interest in dating that "widow."

Zombietastic mayhem ensues when Clay guns down Jerry; said act of putting a cap in the dome of Jerry triggers a zombie rampage/vigilante campaign to bring the murderer to justice. One spoiler is that this revolution is televised.

The filmmakers nicely keep things fresh during this oft-repeated variation of (gore included) running of the bulls. One especially good scene has Jerry unwitting a pursuer who literally eats brain food; Jerry has another memorable scene with a young child.

The figurative commitment to not just making a f**k film continues with a post-killing surprising style change that clearly shows the audience that it is not in Kansas anymore. The artistry continues with an ending that is unambiguous regarding the conclusion but has ambiguity regarding whether it is a happy one and if justice is served.

Anyone with questions or comments regarding "Plague" is welcome to email me; you can also connect on Twitter via @tvdvdguy.