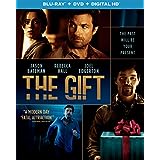 Having '80s teen idol Jason Bateman star in the August 2015 '80s-style feature-film thriller "The Gift," which Universal Pictures Home Entertainment recently separately released on VOD/DVD/Blu-ray (BD),  is very apt. "Gift" being the best of the recent spate of reboots of '80s classics  and original fare in the style of said timeless films is the ribbon on this awesome present.

Although aptly most often compared to the "bunny boiling" film "Fatal Attraction," "The Gift" seems closer to the wonderfully creepy 1990 Michael Keaton/Matthew Modine/Melanie Griffith movie "Pacific Heights" about a yuppie couple unwittingly allowing a highly manipulative tenant who literally may be from Hell into their house. The 93-percent critics' rating on Rotten Tomatoes further attests to the awesomeness of "Gift."

The following YouTube clip of the "Gift" trailer nicely showcases the suspense and tension in the film.

Initially happily married yuppie couple Simon (played by Bateman) and Robyn moving from Chicago into a gorgeous California home only to have a chance encounter with Gordon (a.k.a. Gordo the Weirdo) from the high school days of Simon make the lives of the couple an increasingly horrifying nightmare provides the vibe of the aforementioned '80s psychological thriller. Having all the action condensed to a series of rapid developments makes the film neo. Examples of the latter include Simon and Robyn touring the home with a realtor, moving in, and running into Gordon at a Crate and Barrel style store within the first five minutes of the film and having a few separate moderately paced montages depict passages of time.

Having "Gift" writer/director Joel Edgerton additionally play Gordon is another indication of this film being from the 2010s. It seems that not having the same person fill those roles in art-house and indie-style films is much more the exception than the rule these days. The good news is that Edgerton plays his part well in all three capacities.

It is worth noting as well that the deep and dark visual noir elements and sharp unexpected sounds that greatly enhance the suspense in gift are tailor-made for Blu-ray. The film looks very rich and the crisp and clear bangs and crashes will make you jump.

Frankly, both the picture and sound quality are superior to the experience watching the film at a dated theater.

The titular present is a supposedly goodwill gesture from Gordon to his former classmate; this leads to the subsequent interaction that leads to the ensuing torment. The nature of the relationship behind all this provides the mystery that Robyn seeks to unravel with a suspicious lack of co-operation from Simon.

Part of the effectiveness of this plot is that fans of the Bateman '80s sitcom "The Hogan Family" (Nee "Valerie") can easily picture his high school stud character David Hogan being the teenage Simon (complete with the dark side) whom the audience gradually gets to know. In other words, the boy whom one thinks is Wally Cleaver is equally likely to be Eddie Haskell,

The more general themes include the long-term impact of traumatic incidents, achieving the proper balance between politeness and avoidance regarding annoying people from your past, and discovering that your life partner has a previously undiscovered dark side.

Another nice thing about the film is that Edgerton largely avoids false scares in the form of things such as stray cats jumping out. Each bump in the night is a genuine threat. Other creepy moments include a truly eerie mask and subtle threats that include an indirect homage to the mafia.

The best Blu-ray bonus feature is an alternate ending that Edgerton aptly points out is contrary to the spirit (no pun intended) of the film. We additionally get deleted scenes and other treats,

Anyone with questions or comments regarding "Gift" is encouraged to either email me or to connect on Twitter via @tvdvdguy@gmail.com.