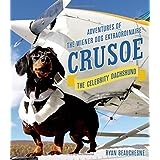 The "author" of  'Adventures of the Wiener Dog Extraordinaire Crusoe: The Celebrity Dachshund,' which St. Martin's Griffin Press is releasing on October 27 2015, would consider it only apt that this collection of his blogs regarding his titular escapades, his recipes, and his photos would prompt the first venture of Unreal TV from DVDs and Blu-rays to prose.  His oft-mentioned charm and good looks both warrant a comparison to Snoopy and provide good fodder for the book. Human author Ryan Beauchesne provides Crusoe the necessary help regarding this undertaking.

The numerous accolades for the blog by Crusoe include multiple "Best Pet Blog" awards and a "Best Blog of the Year Award."

The enormous appeal of this fun book is comparable to the attributes of the classic sitcoms and scifi shows that drive Unreal TV; they all provide wonderfully entertaining breaks from the reality of life.

"Adventures" begins with the tale (no pun intended) of the adoption of our hero by his human parents and their early lives together. These include a move and meeting his brother/sidekick Oakley. These introductory essays further discuss the highly distinguishing (and distinguished) anchor-shaped birthmark that adorns the nose of Crusoe.

Just like the aforementioned beagle, Crusoe has numerous alter-egos (and the photographed apt adorable outfits). Chef Crusoe shares his recipes for treats such as squirrel steak, apple-bacon pie, and carrot cupcakes, Batdog discusses his crime-fighting, and pilot Crusoe recounts his air-travel adventures. Jet-setter Crusoe discusses his vacations. It seems that only the daring fighter pilot who regular battles the Red Baron and the aptly named Joe Cool are missing from the United States of Crusoe.

The following excerpt from "Adventures" nicely conveys most of the themes in the book.

The bottom line regarding all this is that it supports the theory that dogs make the best people. Crusoe has all the qualities for which one could ever hope in a friend and the talent for putting it down in fun prose that reflects a stated love for "Calvin and Hobbes."

Any dogs (or even cats) or their human parents who have any questions or comments regarding "Adventures" is strongly encouraged to email me. You can also connect on Twitter via