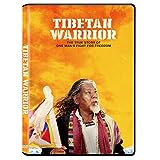 Garden Thieves Pictures provides a good primer on the "troubles" in Tibet in the form of the documentary "Tibetan Warrior," which Thieves is releasing on DVD and VOD on October 9 2015. The international theatrical review is a day earlier at the Sunshine Cinema in New York City.

This equally entertaining and educational film documents the exceptional efforts of middle-aged Tibetan musician Loten Namling to call the attention of the world to the practice of Tibetans lighting themselves on fire (also known as self-immolation) to protest the Chinese oppression that (among other things) is responsible for the Dalai Lama living in exile. A secondary but deeper element of "Warrior" is the internal struggle of Namling regarding whether the decades-long bad situation requires an exception to the course of peaceful resistance that the Dalai Lama practices and preaches. Such a shift in tactics would almost actually involve fighting fire with fire.


We first meet our soft-spoken hero at his Swiss home where he is making a meal for his children and boring them by once again telling them the tale of the atrocities behind his fleeing Tibet several decades earlier. He further explains his reasons for soon walking to Geneva with a coffin literally in tow as his means to get the world to properly address the conditions that are behind numerous self-immolations in Tibet.

The visit to Geneva coincides with the Swiss parliament considering entering a free trade agreement with China; the opposition of Namling relates to the proposed pact benefiting the country that treats his homeland so badly. The official ears to which he makes his plea are plenty polite but still largely deaf.

A more joyful event while in Geneva is a "Free Tibet" concert featuring the Swiss musical group The Young Gods.  Lead singer Franz Treichler explains in new s footage that that involvement stems from what seems to be an off-hand offer by him to do what he can to support Namling,

Our wandering minstrel additionally travels to India, which is where he spent his youth. While there, he visits his elderly aunt. This woman recounts her own rough experiences with the Chinese army before fleeing her native land.

The climax of the film is a meeting in India between Namling and the Dalai Lama. This very civil discussion includes the spiritual leader gently asserting the importance of patience and of his passive approach to the conflict and Namling just as calmly stating that the ineffectiveness of non-violence called for taking up arms for their very worthy cause.

Talking heads and clips of news coverage round out this presentation regarding an indisputably serious situation that Namling feels does not receive adequate worldwide attention. At the least, the film will increase awareness regarding the situation in Tibet and the form of martyrdom regarding it.

Anyone with questions or comments regarding "Warrior" is welcome to email me; you can also connect on Twitter via @tvdvdguy.