'Southpaw' DVD/Blu-ray/VOD: Gyllenhaal as Boxer for Whom All is not Jake 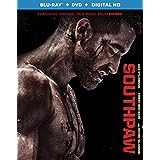 "Southpaw," which Anchor Bay Entertainment is releasing on DVD/Blu-ray/VOD on October 27 2015, is a nice surprise in that this tale of the rise, fall, and resurrection of a boxer from the wrong side of the tracks has little to do with boxing or life on the streets. Instead, it is a good film about a man rebuilding his life after a tragedy that people from all walks of life experience.

One of the strongest endorsements of the film comes from the highly significant other of your (occasionally) humble reviewer. This unsolicited remark from that undue hater of the uber-awesome early Gyllenhaal film "Donnie Darko" is a strong disdain for said actor but high praise for his  portrayal of boxer Billy Hope in "Southpaw."

The film additionally deserves credit for using a speech by Bully at an awards ceremony as an exposition device. This provides the audience with a strong sense of the life story of Hope in the proverbial 30-words-or-less.

On a more general note, the boxing scenes in the large arena and other scenes in large brightly lit settings (as well as the images of a bloody and bruised Hope) look and sound spectacular in the crystal-clear and enhanced sound Blu-ray format. Despite this not being a special effects film, buying it in Blu-ray is well worth the money.

The following SPOILER-LADEN YouTube clip of the "Southpaw" trailer is a reader's digest version of the film. On a happier note, it highlights the aforementioned strong (future Oscar nominated?) performance by Gyllenhaal.


"Southpaw" immediately grabs your attention by opening in the middle of a championship fight; the back-and-forth is exciting, and the brutality is moderate. Like the end of the film, a happy ending is achieved regardless of whether Hope wins. He either emerges as the champ or subsequently starts a feel-good campaign for a second shot at the title.

Everyone who has ever seen a film that centers around a boxer can predict that the fighter who taunts Hope in the aftermath of the aforementioned bout ultimately will end up in the ring with our hero. The escalation and ensuing consequences of a second confrontation are far less predictable.

The aforementioned consequences catastrophically devastate Hope; he loses his home, his family (including his loving but gutsy wife played by Rachel McAdam), his entourage, and his career. Only his love of his daughter motivates Hope to have the audacity to start over.

The next portion of the film has a down but not entirely out Hope doing menial labor and training at the inner-city gym that former fighter/trainer Tick Willis (played by Forest Whitaker) operates. A few amusing "whatyoutalkinabout Willis" moments lead to Tick training Hope, who in turn trains the street kids at the gym. One spoiler is that the kid with whom Hope bonds suffers his own tragedy.

The most contrived plot development has Hope rapidly slated for another championship fight despite not fighting professionally since the aforementioned downfall. This full circle back to the beginning of the film shares the same guarantee of a happy ending as those opening scenes. Either Hope will regain his title and all the associated perks or will return to his currently humble (but more fulfilling) life. Either way, his former arrogance will be fully beaten out of him.

It is arguable that Hope returning to his former glory really is not a happy outcome. Such an ending sends a bad message both regarding success being much more easily attainable than it is in real life and that money does buy happiness. Another way of looking at this is that coming back from the consequences of self-destructive behavior following a devastating loss is possible.

The DVD extras include a feature titled "Southpaw: Inside the Ring." Additional exclusive Blu-ray special features, which enhance the argument for selecting that format, include eight deleted scenes.

Anyone with questions or comments regarding "Southpaw" is welcome to email me; you can also connect on Twitter via @tvdvdguy.