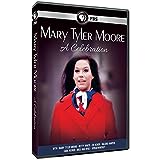 As a recent post on personal connections with stars of the uber-classic sitcom "The Mary Tyler Moore Show" states, PBS is marking the equally recent 45th anniversary of the premier of that series with a "Pioneers of Television" special "Mary Tyler Moore: A Celebration." This well-deserved tribute to that legend and her equally timeless series premieres on October 13, 2015.

"Celebration" begins with a nice recap of the "before they were stars" days of Moore and soon moves onto the tale of how she inadvertently performs a tremendous public service regarding transitioning from a dancer to a comedy actress. "Dick Van Dyke Show" creator/producer/writer Carl Reiner discussing the initial bravery of Moore in taking the role of Laura Petrie and the awesome mentoring that he provides during that period greatly increases what already should be astronomically high regard for that leading lady.

Another great moment has Moore sharing the tale of Lucille Ball being discovered watching the "Van Dyke" cast at work; the subsequent meeting of Moore and Ball is one of the best-ever true Hollywood stories.

Coverage of the transition period between "Van Dyke" and "Moore" includes clips of Moore returning to her dancing roots and shares the role that Van Dyke plays in his former co-star getting her own series.

The fun then truly commences with the apt star treatment, which includes clips galore, of "Moore." One notable omission is not discussing the well-known story of an original intent to have Mary Richards be a divorced woman. The story goes that the powers-that-be feared that going that route would have resulted in many people thinking that Laura Petrie had left Rob.

The following YouTube clip promoting "Celebration" offer a glimpse of the aforementioned impact of "Moore" and the star power/love regarding this documentary.


Most of the highlights of the titular celebration are in the form of Moore and her "Moore" cast mates discussing the show. Shared tidbits include the sacrifice that Moore makes toward maintaining the well-known strong chemistry among the cast and that on-screen frienemies Valerie "Rhoda" Harper and Cloris "Phyllis" Leachman are very good friends in real life. (A clip featuring Rhoda and Phyllis is one of the best in the special.)

Another nice aspect of the coverage of Phyllis is the "Celebration" producers picking a scene with her that has a strong personal connection to feature her. As the aforementioned post of these connections state, this segment in which Phyllis comments on bees mating provided a strong laugh at a perfect time.

The validation of the sentiments expressed in the earlier "Moore" post continues regarding the snippets of the interviews with "Celebration" scene stealer Gavin MacLoed. He expresses the same warmth, sincerity, and depth of emotion as in a wonderful chance encounter with your occasionally humble reviewer several years ago.

The contributions of Betty White include sharing the story behind her joining the cast and expressing genuine glee regarding some of the funnier moments featuring her character Sue Ann Nivens. This look at that character further provides a glimpse at the unexpected wild side of MacLoed.

Additional glee comes in the form of several clips highlighting the wonderful humor regarding Richards interacting with gruff Lou Grant, played by Ed Asner. The "I hate spunk" scene is not included, but the audience does get to see Grant share his thoughts on the threshold for considering a woman to be loose.

Awesome moments from an "outsider" involve Oprah Winfrey introducing clips that show her tremendous love for "Moore" and Moore. These include footage of a fantasy come true for any fan of either.

It is equally fitting that the discussion of the "Moore" finale evokes thoughts of another comic great from the '70s. Watching the final scene and having MacLoed reminisce about the sadness of that time may prompt what Robin Williams, who is the subject of another heart-felt Unreal TV love letter, refers to as eyes leaking.

Anyone with questions or comments regarding "Celebration," "Moore," or Moore is strongly encouraged to email me. You can also connect on Twitter via @tvdvdguy.