REPOST 'The Young Riders' S3 DVD: The Chippendales of the Pony Express' Final Ride into the Sunset 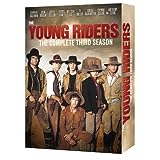 [EDITOR'S NOTE: Unreal TV initially briefly posted this review earlier this week before pulling it in favor of rushing an essay on "Seinfeld" to coincide with a one-day sale on the complete series  "Seinfeld" DVD set.

A legal battle regarding the similarities between this series and the earlier theatrical film "Young Guns" is reflected in a third-season change in the form of a disclaimer at the beginning of each episode that states that "Riders" is not based on "Guns."


As the aforementioned second-season review states, "Riders" tells the tales of a group of six strapping young men (including Josh Brolin and Stephen Baldwin) clad in Stetsons and other cowboy garb and one cute and caring tomboy who work out of a Pony Express way station in the period leading up the Civil War; that increasingly impending conflict is a more prevalent theme in the third season than the earlier ones.


The third season introduces this shift by opening with a raid in Nebraska related to the debate there regarding whether to be a free state or a slave state. This attack prompts the entire "Riders" crew, including their gruff but caring boss Teaspoon Hunter and way station manager Rachel, to move to the way station in Rock Creek, Nebraska.

The immediate goal of the group is to get the way station there back up and running; this role soon expands to an even more active involvement in peace-keeping activity than they experienced in Kansas.

Many of these stories combine the Civil War and wild west mayhem themes by having said mayhem involve issues that divide said riders. The riders with southern sympathies do not cotton to some people owning other people but do object to the federal government dictating the ownership rights of people 100s of miles away.

The War-themed episodes also often have subplots that focus on Noah, a free black man who rides with the group. One such offering has Noah barred from a restaurant belonging to a man who later needs his help.

A more powerful storyline has a cavalry recruiter rejecting Noah's offer to join the Army; this prompts Noah's reasonable response that people being willing to die for him but not to fight with them does not make sense.

Another big change early in the season adds a 14 year-old version of famous outlaw Jesse James to the cast in a "Cousin Oliver" role. Most plots revolving Jesse focus on his effort to prove that he is man by aiming to do things such as shooting the man who kills his surrogate father, riding a wild horse, and joining older brother Frank in the  well-known nefarious activities of that character.


These "Jesse" stories are reminiscent of "Riders'" fellow ABC action-adventure program "The Adventures of Young Indiana Jones." This uber-awesome series depicts the travels of everyone's favorite archaeologist between roughly the ages of ten and his early 20s.

One unintentionally silly episode of the third season of "Riders" has a group of bank robbers return years later to recover the now-missing loot that they buried soon after committing their crime. Their "lather, rinse, repeat" tactics for recovering their ill-gotten gains merely involve confronting a possible suspect, learning that that person could not have taken the money, shooting them, and then starting over.

It seems illogical that the gang does not realize the ineffectiveness of their methods and simply conduct the few minutes of research that discovering the identity of the person who took their money ultimately requires.

The undue violence in this episode additionally seems representative of an increased number of gunfights in the third-season episodes compared to those in the prior season. Finding yourself staring down the barrel of a six-shooter does not seem to require much more provocation than a perception that you looked at someone funny.

Several late-season episodes center around preparing for the wedding of two riders; the only spoiler regarding this is that folks who are hoping for a union between the characters whom Brolin and Baldwin play will be disappointed. This arc ties into the Civil War theme by having one  engaged rider finding himself at odds with a rider with a prominent role in the upcoming wedding ceremony.

"Riders" ends on a very apt note very close to the eve of the start of the Civil War; emotions and tempers are understandably running very hot, and a couple of tragic deaths send appropriate messages regarding the nature of this very uncivilized conflict.

Anyone with questions or comments regarding "Riders" is welcome to email me; you can also connect on Twitter via @tvdvdguy.
Posted by Matt Nelson at 7:56:00 AM