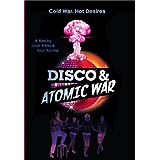 The 2009 documentary "Disco & Atomic War," which Icarus Films Home Video is releasing on DVD on February 25 2014, achieves the twin objectives of members of this genre; it informs and entertains.

Accolades for this story of how broadcasts of western television programs wafting over from Finland to portions of the Soviet Republic of Estonia contributed to Estonia achieving independence include the awards for "Best Documentary" at the 2009 Warsaw and Telluride film festivals and the 2010 Hot Docs film festival.

The following (spoiler-laden) clip, courtesy of YouTube, of the trailer for "Disco" shows that the above-mentioned honors are well deserved.

The primary narrator of "Disco" is filmmaker Jaak Kilmi, who recounts childhood memories related the efforts of local leaders and officials in Moscow to counter the tactics of members of his community to pick up signals from a powerful Finnish transmittor in the late '70s and early '80s.

The perspective of Jaak was particularly interesting because his father was an engineer who invented (and secretly sold) a device that allowed Estonians to pick up the Finnish television signals; the related (but equally clandestine) side business that Jaak's mother operated involved selling a homemade magazine with television listings.

The title of the film relates to how learning of the titular form of dancing swept Estonia despite heavy-handed efforts to quash this decadent practice. Near obsessions with prime time soap "Dallas" and later the David Hasselhoff action-adventure series "Knight Rider" met similar resistance that proved futile.

In other words, Estonians (essentially) wanted their MTV and were refusing to be denied it any longer.

Related amusing bits from the film included stories of school children talking to cars ala "The Hoff's" Michael Knight and Soviet officials looking out for that behavior in their efforts to send KITT, J.R. Ewing, et. al back in front of the Iron Curtain.

The audience also learns of how Jaak's young cousin in a rural part of Estonia becomes a local celebrity through reading her neighbors letters in which Jaak relays plot developments from "Dallas." These extend beyond the mania regarding the unprecedented "Who Shot J.R." storyline to more mundane events that include the efforts of that character to rid himself of his troublesome wife.

A parallel storyline involves a cat-and-mouse game that an Estonian man plays with local officials regarding his detectable use of an antenna that is capable of receiving signals from Finland; this tale has amusing shades of the hilarious '60s sitcom "Hogan's Heroes," which may have been one of the shows that drifted across the Iron Curtain.

Particularly, footage of a well-stocked meat counter at a Finnish grocery store will make carnivores drool and tempt a large percentage of vegetarians and vegans to come over to the "dark side." On a similar note, the scope of "Disco" includes the impact of both "Star Wars" the film and the U.S. missile defense system on Estonians.

The DVD of "Disco" includes a special feature in the form of an hour-long documentary on Yuri Lotman, who was an Estonian expert on culture. Your reviewer fell short of being a model citizen in not watching this almost definitely great film before preparing this post.

The final "cold" hard facts regarding "Disco" are that it puts an entertaining and relatable slant on the decline and fall of the Soviet Union and reinforces the theory that '70s and '80s American television is awesome.

Anyone with questions or comments regarding "Disco" is encouraged to email me; you can also connect on Twitter via @tvdvdguy if you have the  proper equipment.