Brand-New Lamb of God Theatrical Documentary "As the Palaces Burn:' Riding Crazy Train to Hell and Back 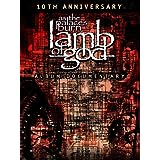 This review of the brand-new uber-awesome documentary "As the Palaces Burn," which hits theaters from Australia to North America on February 27 2014,  is a "very special" post for Unreal TV. The equally awesome website for the film lists the participating theaters in every country.

"Palaces" starts as a documentary on the chart-topping but little-known heavy metal band "Lamb of God" and leads into a frightening tale that shows the aptness of that name.

The aside for this review is that the premiere of "Palaces" comes a few days after the 41st birthday of "Lamb of God" lead singer Randy Blythe. Lamb and soon-to-be "Palaces" fans across the world hope that he had the best possible day.


The elements that justify granting this review the same "very special" status as "Blossom" episodes revolving sensitive teen issues include this being the first time that Unreal TV has covered a theatrical, rather than DVD, release. It is also the first review that is geared to Unreal fans who read these posts on the international URLs.

First impressions of "Palaces" evoke thoughts of the press surrounding the premiere of the Aaron Sorkin sitcom "Sports Night."

Just as those reviews shared that this workplace comedy that is based around the staff of a "Sports Center" style show is not about sports, even folks who do not like metal of any variety and who delight in fare such as the hilariously bizarre video, provided below courtesy of YouTube, of the '60s pop song "Snoopy vs. the Red Baron" will enjoy "Palaces."

Initial concern regarding the appeal (and scariness) of Blythe and his band quickly give way to a desire to meet the available boys at one of the great pizza joints in Washington, DC.

"Palaces" opens with footage of Blythe discusses his early rural blue-collar life and peace, love, and understanding approach to life. He also notes how the cathartic nature of the harsh quality of "Lamb" songs provides an outlet for all the rats in a cage who live in repressive cultures across the world.


The rest of the first 30-minutes of "Lamb" introduces us to the other equally down-to-earth and sane members of the group and their fans. This leads into a segment on "Lamb's" world tour to promote their 2012 album "Resolution."

Even the trailer, which is provided in the following YouTube clip, of "Palaces" does not prepare the audience for the horrible fate that greets the band on arriving in Prague. This trailer shares that Baby is charged with doing a bad bad thing but does not spoil the sequence of events.
The upshot of this portion of the film is that it clearly shows the effort of the Czech government to hold someone liable for the death of a fan at a "Lamb" concert in Prague. The scary part is the ease with which Blythe is cast as that sacrificial scapegoat.

Imagining the physical and mental torture associated with Blythe's highly unfortunate incarceration in a prison in a country with a language that he does not even remotely speak is terrifying. This is not to mention the strain that this places on Blythe's efforts to maintain the sobriety that he struggled to achieve.

Seeing the relatively informal nature of the Czech judicial system and seeming willy-nilly aspects of  how the fate of someone who is accused of a serious crime is handled reinforces the validity of the wide-spread belief that the highly flawed American judicial system is the best one out there.

Another fascinating aspect of this film relates to the efforts to help those who are deciding the fate of Blythe to understand the nature of a heavy metal concert. In other words, one man's wanton disregard is another head-banger's typical day at the office.

The final verdict regarding "Palaces" is that it pulls off several neat feats. This film makes you want to invite a metal head over for game night, effectively manages a reality-show style twist, and realistically demonstrates that anyone can experience the Kafkaesque experience of being pulled off the street and subjected to an arbitrary judicial system.

Everyone is also welcome to connect on Twitter via @tvdvdguy.