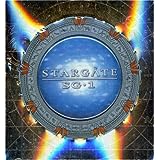 The alignment of elements regarding the bold new series of essays on which Unreal TV has embarked is a terrific bonus for this site.

In this case, the inspiration for a post on the uber-awesome 10-season 1997-2007 "Stargate SG-1" and its spin-offs "Stargate Atlantis" and "Stargate Universe" coinciding with a celebration of the 90th anniversary of "Stargate" studio MGM is pure serendipity.

Giving "SG-1" and its progeny their due truly requires a tome that rivals "War and Peace" in length. A woefully inadequate substitute is that it awesomely expands on the 1994 James Spader/Kurt Russell film "Stargate," which logically ties in the slavery of ancient Egypt with said Stargate. This device is an ancient (fans will get this pun) item that allows establishing wormholes on planets all over the Milky Way and other galaxies.

"SG-1" refers to the elite team that uses the Stargate to boldly go where no man has gone before to seek out new life and new civilizations. More specific objectives include acquiring new technology both because it is cool and because it is needed to protect against both sets of "big bads" who want to add earth to their empires to the tremendous disadvantage of those of us who live here.

The following clip, courtesy of both YouTube and an obviously avid "SG-1" fan, of one person's choice of the top 10 quotes provides an excellent sense of this exceptional series.

"Atlantis" expands on "SG-1" by having an intrepid crew, which includes some "SG-1" folks, travel to the ancient (another pun) city of Atlantis for many of the same reasons as SG-1 and its fellow teams live on earth but work in outer space.

"Universe" is more like the '70s cartoon "Josie and the Pussycats in Outer Space" in that it has reluctant astronauts trapped on an ancient (you get it by now) ship that they largely cannot control and that regularly throws them into conflict with aliens who have little regard for human life.

These threats and a harsh existence have that group "way above the atmosphere [desperately] trying to get back to here" make for a good sci-fi series.

All that will be stated about the animated Saturday morning series "Stargate Infinity" is that it is not spoken of.

The popularity of the "Stargate" franchise provoked speculation that it might rival "Star Trek." The legacy of the former includes the classic line of (then) Captain Samantha Carter, played by sci-fi favorite Amanda Tapping, in the series pilot that having her reproductive organs on the inside does not make her any less capable than a man in any respect.

One can only hope that "Stargate" experiences the same awesome rebirth as "Doctor Who" enjoyed as "Stargate" was winding down.


The aforementioned inspiration for this essay on these series relates to the latest incarnation of a  tradition of eating comfort food and watching "Stargate" episodes on Friday nights. Regular readers know that your (usually) humble reviewer loves watching recently released DVDs and sharing thoughts on them in this forum, but the work aspect of this prompts a desire for a break on Fridays.

For the last several months, this review respite has involved resuming watching DVDs of "SG-1" after a break of more than a year. Pure candor requires confessing hitting a roadblock regarding seventh season episodes in which Corin "Corky" Nemec plays Jonas Quinn while Michael Shanks, who plays "SG-1" favorite Dr. Daniel Jackson, takes a break from the series.

Breathing deeply and telling yourself that you are almost done with the Jonas episodes helps digest them. The remaining nine seasons truly more than make up for the "unlucky" seventh season.

The tradition of these Friday night viewings and comfort-food meals dates back to the early 2000s when "SG-1" moved from Showtime to the SciFi Channel, now Syfy (or sighfi).

Good friends, who became the first kids on the block to have a flat-screen television, would host viewing parties on Friday nights. The barbecue food or pizza was always a treat, and gatherings that involved watching the conclusion of an especially compelling mid-season or season-finale cliffhanger were particularly special.

These series are simply tailor-made for Friday nights (and especially for cold and/or stormy ones) because they provide exceptional escapism in the form of entertaining and relevant stories based on Egyptian lore, Norse mythology (with a very different Thor than the Marvel superhero), Arthurian legend, and religious fundamentalism. You will believe that a man can journey across the galaxy and back while making it home in time to watch "The Simpsons."

Anyone with questions or comments about "Stargate" is urged to email me; you can also connect on Twitter via @tvdvdguy.