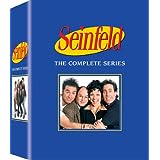 [EDITOR'S NOTE: Seeing that Amazon has the "Seinfeld" complete series set on sale for less than $60 on Feb. 5, 2014 prompted preempting regularly scheduled programming to push this post up a few days.]

The best TV on DVD set to give your Honey Boo Boo for Valentine's Day is an apt topic in this period in which the thoughts of  (not-so) young TV on DVD reviewers with significant others turn to love (and in which an alarmingly low interest in DVD releases require that TV on DVD review sites post a couple of "evergreen" filler articles a month).

Choosing "Seinfeld" for this honor before learning of the Super Bowl-oriented "Seinfeld" mini-reunion makes that event a nice coincidence. (The aforementioned sale is a more icing on the muffin top.) However, another awesome pop culture relic from the same era as that classic sitcom provides the root inspiration for that choice.

Arguably the most insightful strip from the mega-ultra-uber-awesome "Calvin and Hobbes" has rambunctious and wonderfully rude and creative six-year-old boy Calvin musing about love. His conclusion is that finding someone who tolerates you and whom you in turn can stomach is rare and glorious. It is a special bonus when you can revel in the same free-spirited silliness as Calvin and his beloved pet tiger Hobbes.

This philosophy of Calvin is particularly apt when love finds you both in your mid-30s or later and when years of mostly being on your own have largely allowed living your life without making many accommodations for others. Someone coming along who makes you want to compromise is a rare and wonderful treat but can also lead to the hilarity that Jerry Seinfeld and his friends portray so well.

The element of neuroses regarding interpreting what may or may not be signals also fall firmly in the category of "its funny because its true." A related element is the perceived significance of a relatively insignificant event.

One "ripped from 'Seinfeld'" experience that occurred several years ago involved resorting to expressing a pro-Palestinian view to break up with a devout Jew who was constantly aggressively "frisky" and refused to break up.

Another relationship prompted coining the "Seinfeldesque" expression "chain dater." This referred to soon learning of the long and consistent history of a (not-so) significant other starting one relationship before ending another one.

The break-up this time related to said "addict" asserting that an overnight trip 100 miles away a month into the relationship was a "vacation" that signified too strong of a commitment. The fact that a stated dislike for '60s sitcom "Green Acres" was not the provided pretext was some solace.

More recently, and even more closely related to "Seinfeld" lore, the great Twinkie outage of 2012 related to whether if anyone who came around during those seven months was "sponge-cake worthy" regarding a frozen stash of those treats. That decision was never necessary, but my current significant other is even Suzie Q worthy.

"Seinfeld" moments regarding said special someone began with dropping a toothbrush on the bathroom floor very early in the relationship prompting a nanosecond debate about running it under hot water for several minutes and putting it back. Unlike "Seinfeld," this ended with replacing that toothbrush with a new one.


Another "Seinfeld" moment had one of us (who is it not important) causing us to miss a turn on a vacation due to using IMDb to find the name of a "Dynasty" character. This missed turn led to a long alternate route through some of the most boring terrain known to man.

Happier "Seinfeld" moments include discussions regarding the inanity of '70s pop song lyrics. Wishings well are not particularly prone to hauntings; the boredom of a long ride through the desert would prompt naming your horse; no woman in her right mind would want to date even a "treetop lover" who is badder than old King Kong and meaner than a junkyard dog, and a shared love of pina coladas and a corresponding dislike of yoga does not provide any more of a strong relationship than recalling that you "kinda like" "Breakfast at Tiffany's. (Yeah, the last one is from the '90s but is too annoying and has too horrible a video to omit.)

Fortunately, mutual affection for each other and for "Seinfeld" and many other shows has allowed both for approaching a personal record of a two-year relationship and disregarding the "Seinefeldesque" debate regarding the whiny Brady kids and the "The Partridge Family" with the dreamy David Cassidy and randy Shirley Jones. (The "Silver Spoons" vs. "Gimme A Break" dispute is another matter.)

Anyone seeking other DVD Valentine's suggestions or with questions or comments regarding "Seinfeld" or any of the nonsense related to this diversion into "blogland" is welcome to email me. You can also connect on Twitter via @tvdvdguy.