'The Insomniac' DVD: Losing Sleep Over the Decline and Fall of American Society 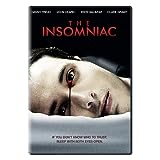 Reviewing the 2013 film "The Insomniac," which Grand Entertainment Group released on DVD in January 2014, is as challenging as witnessing the events that it depicts. This story of the downfall of a roughly 30 year-old guy whose future is so bright that he has to wear shades has so much unrealized potential that seeing that effort fall short of the mark is incredibly frustrating.

Before discussing the film, the fact that logo for Grand awesomely resembles the symbol on the "super suit" of the titular character in the '80s comedy-action-adventure series "The Greatest American Hero" deserves notice.

Most of us would envy the life that John Figg is leading when we meet him. This nice-looking guy is a financial services advisor who is rising through the ranks of the firm for which he and his good buds work, plans to propose to his pretty and cool girlfriend, has a very sweet dog, and has just moved from a studio apartment into his nice childhood home in the wake of his father's death that he is outwardly handling well.

The theft of the classic car that Figg's father owned and a burglary at Figg's new home within 24 hours of that theft start Figg's (not-so-slow) descent into madness.

A home invasion truly is one of the worst experiences that one can endure; finding additional traces of the physical intrusion and discovering additional missing items months later  intensifies the impact of this violation.


Having a break-in occur in an era in which you either do not know your neighbors or have a hostile relationship with them and in which the wave of terrorist attacks that began with the September 11 attacks enhances the angst described above. Further, general pressure to maintain a career in this horrible economy does not help.

The following clip, courtesy of YouTube, of the trailer for "The Insomniac" expertly conveys the aforementioned unease.

A scene in which Figg discovers his father's ashes carelessly strewn on the floor conveys the feeling described above well and is arguably the best segment in the film; other good scenes show Figg's growing anxiety in the space that should be his sanctuary.

These elements make for a great story and "Insomniac" writer/star Eddy Salazar does a decent job with the script. One problem is that Salazar has the previously outwardly stable Figg go unrealistically gangsta in response to the traumas that occur.

Figg experiencing the titular sleeplessness, becoming excessively despondent, unduly paranoid, and showing aggression regarding realistic suspects are valid and interesting responses to his traumas; Figg going way over-the-top simply turns what could be a good indie flick into a movie that seems like an above-average student film.

"Insomniac" also has less-than-ideal casting. Salazar's portrayal of Figg is fairly flat even when the emotions of that character are running a bit high; further, little chemistry exists between Salazar and Clare Grant as Figg's soon-to-be fiancee Martha Collins. They seem to be more like siblings who do not actively dislike each other than a loving couple who are contemplating marriage.

The remaining characters merely seem to provide background for Figg, who appears in virtually every scene. The actors, who include film veterans John Heard and Danny Trejo in small roles, do decent jobs but express surprisingly little depth.

Despite genuine angst regarding further criticizing this largely earnest film, a strong opinion regarding a deleted scene requires expressing that thought.

This particularly well-done roughly 30 seconds that has Figg addressing his father in a church both shows Figg's heart better than any other scene and provides exposition that would have eliminated initial confusion regarding whether Figg is living in his family home or used his raise to buy his own house.

The final thoughts regarding "Insomniac" are that the nature of the story and the obvious care that Salazar devoted to the film make not liking it better tough. Reading the IMDb profiles of director Monty Miranda and producer Romina suggest that having at least one film veteran in either position would have benefited the movie.

Anyone with questions or comments regarding "Insomniac" is welcome to email me. You can also connect on Twitter via @tvdvdguy.