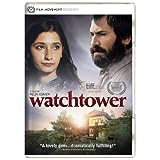 The Turkish film "watchtower," which is being released on DVD on February 18 2014, is the latest example of the expert instincts of Film Movement regarding the uber-awesome (mostly foreign) independent film of the month club that Movement operates. Each entry is an ideal example of its genre and provides excellent relief from the fare at the local multi-plex.

The rural Turkish scenery alone makes "watchtower" worth watching; throwing in a well-written story depicted by a perfect cast that receives great direction are all bonuses.

The following clip, courtesy of YouTube, of the trailer for "watchtower" provides a particularly good sense of the elements described above.


Much of the film separately tells the stories of Nihat, who takes a job manning a fire lookout station on a mountain following a personal tragedy, and Seher. Seher is a college student who takes a job as a hostess on a bus after abandoning her studies.

Like every good drama, "watchtower" allows the stories of the characters to unfold at a leisurely (but not glacial) pace. Director Pelin Esmer feeds us this origin story (and that of Seher) in tasty morsels that he serves at regular intervals.

As is the case with every Film Movement title, the global aspect of the themes distinguishes "watchtower." Most of us feel a deep desire to retreat from friends and family and/or the world at large several times in our lives. We also can resist efforts to infringe on that solitude.

As the liner notes on the DVD set state, divulging specifics regarding what brings Nihat and Seher to their states of quiet desperation would ruin the experience of watching the film. Suffice it to say that much of what transpires comes as a well-presented surprise.

The standard (but always above-average) bonus short this time is a truly charming 17-minute comedy titled "The Foreigner." Using the same theme of isolation as "watchtower," this film tells the story of the arrival of an American in a small Greek village at a time that that community will lose necessary services if the population of that town does not quickly increase by one.

The response (or lack thereof) by people in the village to the unexpected number of twists in this mini-movie tell a nice story. This film offers the further bonus of some good humor and a setting that makes moving to the town without (adequate) people very appealing.

The final word regarding all this is that Film Movement once again gets it right and leaves us truly wanting more in the form of the March 2014 selection in the club.

Anyone with questions or comments regarding "watchtower" or Film Movement is welcome to email me. You can also connect on Twitter via @tvdvdguy.