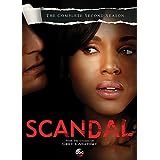 Thoughts regarding this review of the five-disc 22-episode DVD set of the 2012-2013 second season of the current ABC drama "Scandal" evoke embarrassing images of being a hyped-up toddler describing his favorite action-adventure flick.

It is easy to imagine an adult version of this lad excitedly going on for hours about an adulterous president, a conniving Lady MacBeth-type first lady, a couple of cases of people ending up in bed with a corpse, a gay chief-of-staff at the White House plotting to prevent his reporter-husband from finding embarrassing scoops, an assassin who is addicted to killing, etc. The awesome part is that all this barely scratches the surface of the events in this season of "Scandal."

All of this intrigue revolves around Washington, D.C. "fixer" Olivia Pope, played by Kerry Washington, and her associates. The individual skills of said associates range from legal representation, to burglary, to surveillance and computer hacking.

The following clip, courtesy of YouTube, of a scene from early in the second season of "Scandal" provides a good sense of the drama (and a lesser one of the interconnectedness of everything) in the show.

A typical episode begins either with a prominent D.C.-area individual being caught literally or figuratively with his or her pants down or a development in one of the several ongoing (sometimes life-or-death) dramas in the lives of Pope and/or her employees.

Many ongoing story lines relate to Pope's romantic past (and present?) with President Fitzgerld Grant, played by Tony Goldwyn, who is the Republican version of JFK.

These intriguing sub-plots include "ripped from the headlines" investigations into assertions of tampering with voting machines, a Reagan-style assassination attempt, an evil power-hungry vice president, and the effort to uncover the truth behind the abduction and identity switch that Pope associate Quinn Perkins experiences.

The events described above (and many more) demonstrate that there generally is only two degrees of separation regarding high-level hi-jinks inside the Beltway. Scenes in which Grant's quasi-kitchen cabinet clandestinely meet to discuss tactics for dealing with old and new crises further confirm this.

Client-oriented "ripped from the headlines" stories include discovering a female intern in a D.C. park implicating power-brokers, a prominent married civil rights leader dying under very compromising circumstances, and a search for a suitable spouse for a never-married middle-aged potential presidential candidate.

A few episodes also flashback to the periods in which Pope worked on Fitzgerald's presidential campaign and subsequently in the White House. These offerings provide the intended background regarding current developments.

Great individual moments from the second season include a hilarious nude scene involving the epitome of the naked truth, an equally tense and funny meeting of a team of top former CIA assassins, and scenes involving a brief period in which the personal hygiene of one of Pope's associates takes a downward trend.

All of this adds up to a highly entertaining series with virtually non-stop action that easily passes the "one more" test.

Anyone with questions or comments regarding "Scandal" is welcome to email me; you can also connect on Twitter via @tvdvdguy.